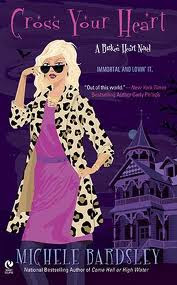 Life in Broken Heart is always a bit on the unusual side; after all, the town is full of parakind, and as far as mankind is concerned, Broken Heart doesn’t even exist. Yet, for Elizabeth Bretton, life is about to get even more unusual. A widow with her unhappy marriage behind her, Elizabeth has built a nice life for herself in the town her ancestors helped found. Being a vampire has some definite perks (no more aging!); she has a wonderful group of friends and enjoys seeing them happily in love, even though she believes that romance and love are not in the cards for her. Then Elizabeth receives a jewelry box that once belonged to her ancestress, and it brings with it something determined to kill Elizabeth, and someone hoping to right a wrong. After an attack by a disembodied voice, another voice, this time female, urges Elizabeth to the woods, where she finds a skeleton...and then a were-jaguar.

Tezozomoc “Tez” Jones is completely different from any man Elizabeth has ever met, or been attracted to. He saves her from whatever chased her in the woods, teases her and propositions her in ways that Elizabeth is completely unprepared for, and takes care of her the way no one else has ever done. He’s determined to protect her from whatever attacked her, in spite of the fact that nobody, not even Queen Patricia, can tell if it’s a ghost or a demon that is causing Elizabeth problems. Yet, they soon find out that the problems aren’t confined to Elizabeth, and all hell is breaking loose in Broken Heart. But, no matter what’s been unleashed upon the parakind in town, Tez is determined that the woman he already thinks of as his will come to no harm.

More than Elizabeth’s disbelief in a personal happily-ever-after gets turned upside down in CROSS YOUR HEART. Legend has it that the town was cursed so that any woman who found love would also find heartbreak, thanks to the infidelity of one of the town’s founders, and his wife’s subsequent suicide. The curse was supposedly broken when the vampires came to town, but Elizabeth is noticing unhappiness within the marriages of some of her friends. The strange happenings lead Elizabeth and Tez to a century-old mystery and some shocking secrets. Fans of the Broken Heart series will enjoy the chance to revisit favorite characters and to learn more about Elizabeth and see her find her perfect, if somewhat surprising, match. A wealthy upbringing, a marriage that was basically arranged to a man who enjoyed variety, and her life as a socialite paint a very prim and proper picture of Elizabeth. She’s shocked to find herself attracted to Tez and his crude speaking and irreverent ways. Even more stunning to Elizabeth, though, is the thought that maybe love and romance are possible for her after all.

As it is part of a series, it might be helpful to read the books in order to have a better grasp on the town and its inhabitants. However, for those unfamiliar with the books, CROSS YOUR HEART stands well enough on its own, and is a thoroughly enjoyable tale.