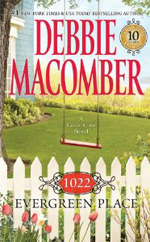 The last time we visited the town of Cedar Cove, Mary Jo Wyse had just given birth to David Rhodes’s baby. In a stable with a few sheep, a donkey, and a cantankerous camel looking on, tiny Noelle came into this world with the help of firefighter Mack McAfee, who immediately fell in love with both the baby and her mother. Now, Mary Jo lives in the duplex next door to Mack and pays a reduced rent to an unknown landlord. Said landlord is really Mack, but he knows if he tells Mary Jo, she’ll want to pay the going rate (which she can’t afford), or worse yet, she’ll move out. Wanting to keep her close, he asked her to marry him, and she accepted, and when he broke off the engagement, things became strained between them. Mack is so in love with this woman he doesn’t know what to do. He just knows he wants to love and protect her and little Noelle. But Mary Jo doesn’t want to be protected. She had enough of that from her domineering brothers, and when she moved to Cedar Cove she was hoping to get away from that kind of smothering love.

Mary Jo is totally in love with Mack, but she doesn’t trust herself or her decisions. She thought she loved David Rhodes, and look where that got her. Now she’s alone, and David could care less about their daughter, but still, that hasn’t prevented him from threatening her with a custody suit if she tries to collect support. Mary Jo will work this problem out by herself. She doesn’t need Mack’s help or help from her brothers. Meanwhile, she just found a cache of old love letters from World War II, and she’s hoping that she can mend fences with Mack by asking for his help to find their owner.

A couple of months ago, Lincoln Wyse married Lori Bellamy just a few days after he met her. He was in town to check up on his sister, Mary Jo, when he found Lori. He fell in love instantly, and he’s never been happier. But when Lori’s father starts making trouble for Linc and his new business in town, things begin to look dark.

Will Jefferson has decided that he needs a woman. Not just any woman, but local artist Shirley Bliss. It shouldn't be too much trouble getting her to fall into bed with him; after all, no woman has ever said no to him. However, when Shirley not only turns him down but falls for his friend, Will has some thinking to do!

Rachel Peyton hasn’t told her new husband, Bruce, that she’s pregnant. She can’t. It might upset the delicate balance of their relationship with his teenage daughter, Jolene, who isn’t taking to their marriage very well. Jolene is making life quite difficult for Rachel, but she’ll wait the girl out. There’s still time to put off telling Bruce about the new baby and, until then, maybe she can smooth the way with Jolene.

1022 EVERGREEN PLACE is a sure-fire hit! The tenth book in the Cedar Cove series, this story is the best yet. The characters are dynamic, and their stories are riveting. The story focuses on Mary Jo and Mack and the old letters, but alternating chapters bring us into several subplots around Cedar Cove. The other residents joining Mary Jo and Mack as secondary characters are: Charlotte and Ben Rhodes, who are trying to help Mary Jo handle Ben’s son, David; and Sheriff’s deputy Gloria Ashton, Mack's stepsister and daughter of Roy and Corrie McAfee. Many other personalities grace these pages, and the story rounds out to a bit of a mystery about Gloria, which will pick up again in the next book. I can’t wait, but in the meantime, if you haven’t read these stories, be sure to check the list of all the Cedar Cove books which can be found on the author’s website: www.debbiemacomber.com.

Even though this is the tenth novel in The Cedar Cove Series, it picks right up and runs by itself. The only complaint I have is that I finished too soon and I want more! Alas, we have a bit of a wait until next year when 1105 YAKIMA STREET is available.

Until then, 1022 EVERGREEN PLACE is the best book ever! I couldn’t put it down, and neither will you. That said, it deserves RRT’s Perfect 10 award and the opportunity to be a contender for the Best Book of 2010.