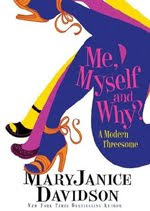 Though Cadence Jones is an FBI agent, she's not your typical button-down suit one would expect from a government organization. For one, Cadence is part of a covert branch, the Bureau of False Flag Ops (BOFFO), who track down what would be considered unusual felons. Second, the branch is staffed with agents with rather unusual skills and personalities. Third, and finally, Cadence works with her sisters, Shiro and Adrienne, to solve the cases, an unusual and unique partnership. So, if there is one word to describe BOFFO, it would be 'UNUSUAL'.

In many ways, Cadence is just like the girl next door—fun, likes to go out with her girlfriends, loves trying new recipes, and is very close to her sisters. On that last point, one might say Cadence is extremely close to her sisters, if one understands that, in this case, her sisters are in actuality two split personalities that developed after Cadence witnessed a traumatic event as a child. When one realizes that BOFFO not only employs Cadence with her Multiple Personality Disorder (MPD) but other equally as dysfunctional individuals—sociopaths, kleptomaniacs, paranoid psychotics—it's immediately clear that ME, MYSELF, AND WHY? is going to be an unusual (yes, there's that word again), but amusing and often laugh-out-loud ride.

I usually write reviews in third person, but have to be a little more personal with this one. Cadence Jones is a character I can't say I've ever seen before, and I have to say that, for once, I questioned the author's sanity/temerity? Is MaryJanice Davidson brilliant? Or is she CRAZY? I'm going to go with brilliant because I literally devoured this book in a few hours and enjoyed every word I ate with my eyes. It's not too many authors who can make readers look past things like MPD and pyromania to the humor and mystery of a thriller. It's very few authors who can make one enjoy and understand a story where the main character is actually three in one body. However, it's very clear from the start who is in control—Cadence, Shiro, or Adrienne—and readers will quickly be invested in trying to figure out which situations will bring out which sister. A bit of background is shared, hopefully more to come, to explain what happened to Cadence to cause the split. But the bigger question facing her is does she want to fix things, and if so, how will her life change as a result?

That question and others will be answered in future tales in the trilogy and I'm sure new ones will be posed. The unusualness (can't seem to stop using this word) of the main character and theme of the story is intriguing and weird and thoroughly enjoyable, and earns ME, MYSELF, AND WHY? a Perfect 10.

Oh she hasn't had one out in a while and wondered about that one! I just got the prequel to it that was free. Great review. I shall be watching for this one!