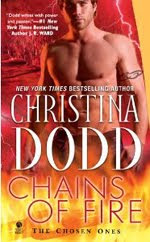 Switzerland and New York, the Present

The Legend:
In the long, long ago, two outwardly beautiful humans came together and mated. The woman was sure the resulting conception would produce a child as magnificent as its parents. Instead, she bore twins who were marked by imperfections. The mother immediately abandoned the boy deep in the forest and cast the girl into a stream. The two of them were saved and gifted by the gods and became the first of the Abandoned Ones, all of whom have some special gift. Both twins gathered six others like themselves. Those who are followers of the boy child are the Chosen Ones who work for the good. The followers of the girl child are the Others, servants of the Devil. This still holds true today; both groups gather recruits from among the world's Abandoned Ones. (Quoted from reviews of the first three titles in this series, STORM OF VISION, STORM OF SHADOWS, and CHAINS OF ICE.)

For centuries, every seven years, the Chosen Ones have selected seven of their number to band together in a search for abandoned children with the special marks and talents that show they are among the Chosen. The Others also look for the Abandoned Ones for their own evil purposes and almost succeeded in wiping out the Chosen a few years ago when they bombed the Gypsy Travel Agency, the Chosens' cover firm.

Samuel Faa, one of the current seven, is sent to Geneva to gain access to the Agency funds. A prime reason for choosing Samuel is his ability to control others' minds, a trait that comes in handy when dealing with the bank's president. So now, the Chosen have the means to continue their search for Abandoned Ones and to fight the Others. While in Switzerland, Samuel attends a children's literacy society fundraiser put on by the mother of fellow member of the seven, Isabelle Mason.

Samuel and Isabelle have a long history. Though both were abandoned as babies, Isabelle was adopted by the Masons, a wealthy Boston elite couple by whom she was given every advantage as though she were their own child. Samuel was given to the Mason's begrudging butler and his wife to raise. The perfect butler's main goal was to drum his "place" into Samuel's head. At one time, Samuel and Isabelle thought they belonged together, an idea that horrified their parents. Now Samuel hopes he can make amends for botching things and rekindle the old feelings.

While at the party, Samuel overhears a plot that would harm a child. Before racing to the rescue, he gathers up Isabelle. Her talent as an empathic healer might very likely be needed.

For me, CHAINS OF FIRE is the best of the series so far. While the earlier books introduced the characters and set up the story world, a good part of CHAINS OF FIRE is a straightforward tale of two people with a past together being given another opportunity. What is unique—and edge of seat thrilling—about this plot line is that Samuel and Isabelle are trapped together under tons of snow and are likely to have only a few days to live.

There is more in this novel about the other Chosen Ones and their searches for answers to several mysteries, but I was most moved by Samuel—previously the least liked among the seven—and Isabelle, whose healing is done at great cost to herself. Piquant flashbacks to their childhood's stolen moments reveal much about them. And there is one scene late in the book I will never forget. I was reading in a waiting room while my car was being serviced and had to fight to hold back tears over chapter fifty-three. Who wants to be seen crying in public? About then I began to consider awarding CHAINS OF FIRE a Perfect 10. There is one small caveat in my recommendation, however. The love scenes, while perfectly appropriate to the story and a couple in love, are very explicit and detailed. I couldn't skim through them as I usually do, because they reveal too much about the characters and their relationship.

If this review comes across as too personal, let it signify how moving I found CHAINS OF FIRE. The three earlier books are excellent reading, but CHAINS OF FIRE is marvelous. I hope you enjoy it as much as I did.

HI Mimi, The Wild Rose is such a terrific place, isn’t it, with so many opportunities for romance. And White Rose of course is its adjunct spin-off for inspirationals. I am treated so well. I was fortunate to be able to attend The Wild Rose Retreat in Bandera Texas, last spring. Oh my. I still dream about it at night. A perfect four days. Thanks so much for posting today. Canada is totally on my Bucket List. I fell in love with it during the Olympics, and your National Anthem totally rocks.