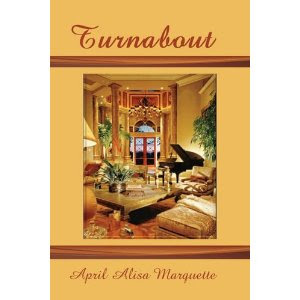 My newest release Turnabout is a love story, but with a twist. It involves not only the lovers, but their family, friends, and even their foes—a few people who don’t wish them well. Turnabout is sometimes funny, its subject matter is very sensitive, it is sensual, and steamy. It’s about sexy JaMerican Abigail who would like to be involved with ruggedly attractive pop music producer Joseph. However, Abigail’s ex doesn’t want to stay out of her life. So you know there’s drama, because the producer, Joseph is not feeling this. Abigail and Joseph’s friends and family members also want to have their say. Then there are others who betray the couple, at the worst time—when misfortune befalls them! But isn’t that how life goes? If readers need erotica, if they’d like to think, if they enjoy beautiful imagery, and don’t mind feeling frustrated as well as exhilarated, just like in a real relationship, then this must-read will not disappoint!

I have so many favorite scenes, but I’ll list just one. I love the part in the story where Abigail and Joseph fight, over a woman friend of his. They do so at a time when there are people, including family members, surrounding them. You know the family gets involved…then the couple has to band together, to withstand the onslaught. In this scene there are some hilarious as well as touching and sensual moments. As with everything I write, I try to run the emotional gamut, and give readers a bit of everything.

Well, I can truthfully say that I have always written, since I could string words together. As an adolescent, I wrote short stories which I read to friends and family, but afterward I’d toss the stories. However, it wasn’t until I was about sixteen, and had read the then-best seller, that I realized that I too wanted to be a career—not closet—writer. That was my ‘aha moment.’ Then I vowed to never throw away any more of my work. I promised myself that I would create a viable work of fiction and get it published.

The ideas for stories come to me, anytime, anywhere. I could be driving, and an idea will start to germinate. I also ‘hear conversations,’ what characters will say in a book. These things I jot down or type, because I know that a story is about to come to life. For me, the ‘idea stage’ is very exciting.

My interesting writing quirk is that I have a visualization board. It enables me to see, or visualize the book that I am currently writing as a finished product. It’s a goal that I work toward.

Surprising was that I am a channel, a conduit… I say so because I have not created the idea for any book. Every single one has come to me, but from where? There could be a dozen answers to that question...imagination, spirits, divine intervention—the list is endless. However, what I know is: if I weren’t an open conduit for these book ideas, they would pass me by, and go on to the next person who would be willing to embrace or explore them.

There are many authors that influenced me. As a young woman I was introduced to Maya Angelou and Amy Tan. They tell stories in a simple no nonsense way. Then there was Terry McMillan, and Bebe Moore Campbell. They made me chuckle, but they also caused me to feel. Nora Roberts took me many places with her writing, and Rosamunde Pilcher put me in a time and space with beautiful details. Our beloved E. Lynn Harris challenged perceptions, and caused me to think. All of these authors influenced the way I look at and approach writing. My friends are valued for their honesty. If something will not work, they say so. If it does, they cheer me on.

My family thinks my career is great. Achievers as well, they like showing people my work. They also tell me things that are hilarious. A few times I’ve flipped the script and have used a portion of their, or my own, experiences in a book. What is great though is that they know that never would I embarrass or hurt them in print, because that is not my way. I am into empowering people, my readers especially. Amid all the drama in my books, I always want to offer hope.

My other interests include traveling. I want to one day add Africa to the list of places that I have been. I am also into expanding the minds of young people. Many people helped me to expand my mind, so in turn, I do my part. I tutored high school students. Now I work with an Atlanta organization whose goal is to make sure that more of our youths acquire self-esteem and a sense of belonging. Our aim is to see them go to college or to trade schools to gain life-navigation skills.

Next for me is the completion and release of my novel ‘Iniquities.’ It is the third book in The Cohort Trilogy. In this book, the beautiful buff gay male named Beau returns. Readers get to see his life, his loves—yes his same-sex relationships, and his opposite sex relationships—if there are any, and we’ll explore his secrets. Unlike the first two books in the trilogy, this one focuses mainly on Beau. This new book ‘Iniquities’ is a wicked little ride. Not for the faint of heart, it reveals men, who may not be what they seem…as it also depicts women who are something else as well. Let me say this. Beau’s story just may be the most interesting one in The Cohort Trilogy! Coming soon, readers will be able to order it online, at Amazon.com, and a host of other sites.


Learn more by visiting April's website at http://www.aprilalisamarquette.com/
at August 22, 2010