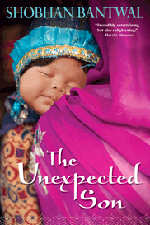 Vinita Patil is leading the great American lifestyle with her husband and daughter in New Jersey. After twenty-four years of an arranged marriage, Vinita loves her husband and adores their daughter, and all is well in the world with her. And then one day an anonymous letter arrives from India with devastating news. Shattered after a phone call to her brother in their hometown of Palgaum in India, Vinita's life changes dramatically. As she prepares to fly to her birth country, Vinita reveals to her husband a long-dead secret that could threaten their marriage.

In Palgaum in 1976, two ethnic factions are in a political war with each other. The Marathi and Kannada have fought for control of the city, and, at times, the skirmishes are bloody and deadly. No self respecting Marathi girl like Vinita would be caught dead with a Kannada boy, and vice versa. So when the hero of the college cricket team, Som Kori, a Kannada, shows an interest in plain, quiet, studious Vinita, alarm bells should have gone off in her head. Instead, Vinita begins a clandestine relationship with Som, which ends only when she discovers she is pregnant. And Som makes it very clear that he will not marry her and that he wants her to get an abortion. Which is also what her distraught family would like her to do after her tearful admission. The family's standing in the community will plummet if Vinita's story gets out.

THE UNEXPECTED SON is a beautifully presented story of a mother's love. Vinita must make some extremely difficult decisions as both a teenager and later as an adult regarding the one mistake she made as a young woman. Later choices must be made, and many people are affected in both India and New Jersey, throwing Vinita into a place she never expected to be in her life.

This enchanting, heartbreaking, but uplifting tale was impossible to put down. Vinita's choices as a girl were few, and, as an adult, she realizes that her present day options are no easier to accept. A character driven tale, THE UNEXPECTED SON is richly peppered with descriptions of the middle class lives of the residents of Palgaum. Readers will smell the incense and envision the brilliantly colored clothing of the women. All in all, an extremely well written book that will grab you at page one.