Q & A with Catherine Kean! 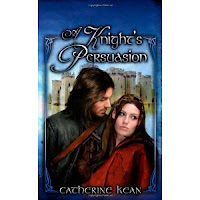 Note: There is a giveaway. Check out the bottom of this interview.

1. Tell us about your newest release.
I’m very excited about my medieval historical romance A Knight’s Persuasion, released in May by Medallion Press. It’s the fourth book in my award-winning Knight’s Series and is set in the fictional county of Moydenshire, England, in the early 13th century. A quick note here . . . I often have readers ask if my series books can be read as stand-alone titles. Yes, absolutely, they can!

The bold, handsome hero of A Knight’s Persuasion is twenty-year-old Edouard de Lanceau. My readers will recognize him as the son and heir of Geoffrey de Lanceau from the first series book A Knight’s Vengeance. Edouard is a trained knight raised from his earliest days to honor the code of chivalry. He’s undertaking a vital mission for his father when he discovers a wounded and unconscious woman lying in a river. He vows to save her, especially when he realizes the damsel in distress is Lady Juliana de Greyne, the beauty to whom he was almost betrothed. While their engagement never went ahead, and he was tricked into a betrothal to her younger sister instead, Edouard still desires Juliana.

However, in trying to save her life, he is taken prisoner by his father’s enemies and chained in a cold, wind-whipped tower. To add to his torment, Juliana is imprisoned along with him. However, she doesn’t remember him, because she suffers from amnesia. Fighting his feelings for her, he tries to win her trust and help him escape—before their enemies use them to destroy Geoffrey and seize control of Moydenshire.

It’s a story filled with danger, adventure, simmering passion, and excitement—elements, I am told, of my previous series books: A Knight’s Vengeance (Book One); A Knight’s Reward (Book Two), and A Knight’s Temptation (Book 3). More details and excerpts from these titles can be found on my website: http://www.catherinekean.com/

By the way, I just love the cover design for A Knight’s Persuasion. It’s so subtly sexy, and features model Jason Santiago, who won the Mr. Romance title at the 2007 Romantic Times Convention, and the lovely Chynna Skye Pozzessere, one of the daughters of New York Times best-selling author Heather Graham. I’m honored to have these two beautiful people on my book cover!


2.  Can you tell us a little about your favorite scene in the story?

There’s a scene about half way through the novel when Edouard and Juliana are alone in the tower at night. It’s pitch black and bitterly cold. While Edouard is fighting his desire for Juliana, he knows she could fall deathly ill if she gets a chill, especially when she is already fighting a bad head wound. His chains prevent him from going to her. So, with only his voice, he coaxes her to cross to him and lie in his arms and be warm. It’s a very sensual scene with a bit of humor, too, and I loved writing it. Here’s the link to this scene on my website: http://www.catherinekean.com/index_files/Page336.htm

Probably when I was about 4 years old! J I’ve always loved to write stories. I grew up an avid book reader, and that, I’m sure, nurtured my creative muse. I have copies of stories I wrote when I was a child. I wrote my first novella at age 12, my first book at 16. I enjoy looking back on these and see how far I’ve progressed as a writer since then.

All kinds of places, including research books (I have quite a few on castles and life in the Middle Ages, as well as medieval cookbooks), historic sites and museums I’ve visited in England with my family; newspaper and magazine articles; and programs I’ve watched on TV (I loved Cities of the Underworld. Fascinating show!) I think for a writer, ideas are everywhere.


5. What would you say is your most interesting writing quirk?

For some reason, my best ideas come to me late at night, usually when I’m lying snug in bed, just about to fall asleep. Sometimes the ideas are so fabulous, I force myself to remember them, so I can jot them down in the morning. I probably should get up and write them down right then and there, but I’m too lazy. Besides, I’d have to find pen and paper, and doing that, I’d probably bash my toe on a piece of furniture and wake my husband. J

There are many things I could list. Perhaps most surprising is how attached I’ve become to all of my characters by writing their stories. They’re real people to me, with emotional conflicts, dreams, quirks, and ambitions just like living, breathing human beings. One of the joys of writing my Knight’s Series is that I’ve been able to spend more time with the cast of characters I created in A Knight’s Vengeance, and I’ve really loved that.

I read a lot of historical romance before I tried writing it. While I can’t think of specific authors who influenced me, I know the wonderful stories in the genre as a whole inspired me to try fleshing out my own ideas. In terms of friends, I definitely have to thank my critique partners. They’re awesome ladies, and a constant source of wisdom and encouragement.

They are very, very supportive, which is wonderful! My husband hands out my business cards and mentions my books to people. Last year, I was invited to speak to my daughter’s Language Arts class on being a writer, which was a lot of fun, especially since some of the kids told my daughter I was “cool!” My parents in Canada give copies of my novels to friends and associates to help build my reader list, and my sister not only talks up my books to her friends, but has been a beta reader for early drafts of a couple of my novels. I am so grateful for all their support.


I love to bake and cook. My family says I’m a great cook, which is nice to hear! J My British husband is especially happy when I cook him a traditional English roast beef dinner with Yorkshire pudding, roast potatoes, and veggies, with lots of rich gravy. I also enjoy gardening (I’m growing tomatoes this year); walking; browsing antique stores; watching Dr. Who, British comedies, and Primeval with my family; and reading (although sadly, I have very little free time to read these days).

My literary agent is currently shopping the partial of a medieval that I hope will be the start of a new series. I’m also working on a paranormal romance set in modern-day Florida. For the most current news on my upcoming projects as well as author appearances, please visit my website at http://www.catherinekean.com/

Now, for the giveaway:

Catherine says:  I’ll be glad to give away a copy of one of my Knight’s Series books—winner’s choice—to one person who comments on my post on the 11th.

I love to read stories set in the Medieval period : castles, knights, kings, queens, intrigue, lust, betrayal, war. It had it all! I think of Camelot.

I haven't read any of your books yet.

Thanks for the intro.

Hi Laurie! :) Sounds like you and I have similar tastes in what we like to read! Thanks so much for commenting today.

I read a lot of historical romances, and the medieval period is one of my favorites. To me, a knight symbolizes strength, honor, and loyalty. He is a protector of those he loves. Who can resist a man like that? ;-)

Hi Catherine,
Congrats on the release of A Knight's Persuasion. And best wishes for your new series and Florida paranormal.

LOL @ late night inspiration! I keep my Palm Pilot by the bedside for that very reason (I'm not a writer, but I like to write down my brilliant ideas to see if they still seem as brilliant when I wake up). :)

Thanks for the lovely interview, Catherine--congrats on your successes! And how fabulous to have such a supportive family--what a wonderful blessing! I haven't read your titles yet, but will have to give them a try!

Great interview Catherine.
I don't find it surprising at all that you become attached to the characters you create.

Fantastic interivew! And I read the excerpt--I can't wait to read the rest of that fabulous book!

It's been a while since I read a book set in Medieval period this one sounds like it will be a very good book. I really enjoyed the interview it was very interesting.

Hi cheryl c! :) I love meeting readers of historical romances. You are absolutely right! Who can resist a man with such admirable qualities? Especially when he's gorgeous and wearing armor? ;) Thanks so much for stopping by today.

Hi Kaelee! :) Thank you so much for your congrats and kind wishes! :)

Hello Lindy! :) Great idea about the Palm Pilot. I'm sure your ideas ARE just as fabulous in the morning. Thanks for leaving a comment today.

Hi flchen1! Thank you for your kind words. :) You're right; I am very lucky to have such a supporting and loving family. It was a pleasure to "meet" you!

Hi chey! Thanks for your kind comment. It's great to "see" you here. :)

I would love to read your book and congrads!!!!

Hello Chelsea B! Thanks for reading the excerpt. :) I hope you enjoy the rest of A KNIGHT'S PERSUASION. I really appreciate your stopping by today! :)

Hi Sherry! :) I'm so glad you enjoyed the interview. It was a lot of fun! Thanks for commenting and best wishes to you.

Hi Syeda! :) I'm delighted that my book intrigues you! :) Thanks for your congrats.

Hi Catherine! There is so just something special reading the medieval settings! I get most lost within the pages of these than any other historical setting! I often go look up things new to me! Besides using research books, have you too visited any of the settings for your books?

Hi Caffey! :) I love the medieval settings, too. I think castles are so romantic. I've visited quite a few of them on trips to England and find them fascinating. Thanks for your comment!

Hi Pam P! Thanks for reading the first two books in my series. That's wonderful! I'm so glad you enjoyed them. :)