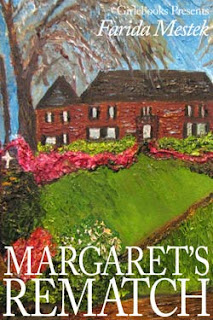 «Margaret's Rematch» is a traditional, Regency-set novel. It tells a story of Miss Margaret Fairfax – a young, handsome girl of independent fortune – who must settle in her new life at Northbrook Hall – the country estate of her brother-in-law – upon her sister’s death. There she faces a major challenge of proving to Mr. Westfield, whose dislike of her is legendary, that she is worthy of his regard, despite some scandalous rumours that had followed her from London. However, when it looks like the matter of his opinion is finally resolved in her favour and his heart is on its way of getting attached, Margaret’s complacency is shattered by the arrival of her deceitful friend, Miss Catherine Stockley, who poses a serious threat to the promotion of their relationship to the next level, as she employs her extensive knowledge of Margaret’s past and her cunning mind to discredit Margaret in Mr. Westfield’s eyes once and for all.

I would say that my favourite scene is the one on the lake. Margaret and Mr. Westfield are taking a walk, having left behind a most disagreeable party, when Margaret takes an involuntary plunge into the water as she tries to help Mr. Westfield's son send his toy fleet across the lake. The scene though humorous is also serious, because both Margaret and Mr. Westfield finally become aware of the strength of their feelings for each other. It is also very sweet and tender, because Mr. Westfield tries to spare Margaret the mortification by making a complete fool of himself and it is here at the lake that they share their first intimate touch.

I always knew that I wanted to be a writer. I've been making up stories and writing all my life and I always dreamt of being a published author.

Usually the ideas are just there, in my mind, waiting to be written down. The characters come knocking on my door, demanding to have their stories told. As for information, I check Regency-related sites and blogs and I read a lot. I have hundreds of books stocked for research purposes and I slowly tick them off my to-read list.

Actually, it's more of a nuisance, because I can't write out of order. It's just impossible. Another thing is that I like to read aloud what I've written, especially when it comes to dialogues. In this way, I get the feeling that it's not me but the characters who do the talking. In fact, before starting writing a dialogue I let the characters take over completely. It must make me sound crazy, but it's an excellent exercise and I get to know the characters much better.

I learned that the characters that I create will never be my friends and as such they will never share with me their innermost thoughts and wishes. It happened when I was writing a dialogue and I learned so much new information about one of the characters that I had to wonder why I knew nothing of it before. And then it struck me that I couldn't possibly know, because I am not their friend. In fact, they don't know me at all! They let me tell their story, sure, but they take it upon themselves to guide it as they please, because they know things that I don't, and as such I'm not safe from surprises until the last word is written. Once I've learned that, I understood why characters and stories always get out of my control.

I was always aware that I was an author material and my granny, realizing that I had a certain talent, always encouraged me to write. But, I suppose, Jane Austen, Agatha Christie and JK Rowling have been a great inspiration.

Only a few years ago they thought it was silly to want to be a writer and spend so much time writing, but now that I've completed several books and contracted two, they think that it's really great. They no longer tell me that I should abandon my dreams of becoming a published author and instead tell everyone about my books and ambitions. They even made a huge poster at work to announce the arrival of «Margaret's Rematch» for everyone to see!

I love reading, singing, learning languages, teaching, drawing. In fact, at the moment I'm working on a series of sketches of my characters from «Margaret's Rematch» for a new bimonthly feature «Meet the Character» that I'm starting in May on my blog.

Well, besides, traditional Regency-set stories, I also write male/male Regency-set stories. My first novella is at the editing stage now and it is due to be released by Dreamspinner Press some time this summer. I'm also revising my newly-completed story and after that I'll start outlining my next project.

I love reading regency romances and Margret's Rematch sounds like a delight to read! I shall be checking your site to find out where to get this. Congrats on the release!

Thank you very much, Caffey!