A Perfect 10: ON THE STEAMY SIDE by Louisa Edwards 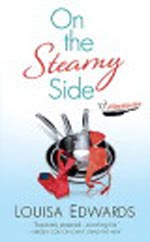 Heading to New York for a new life of fun and adventure is just what Lilah Jane Tunkle needs after getting laid off from her job as a high school drama teacher in Virginia. Who knew that getting a drink spilled on her clothes and a rush of anger would cause Lilah to experience a passionate night with a stranger she picks up in a bar? Devon Sparks is not only sinfully gorgeous, he’s also one of the most famous chefs in the country, and Lilah has no clue who he is. That makes Devon that much more eager to take her home. Something about this woman is fresh and different and he’s intrigued. Lilah on the other hand has never done anything like this and can’t believe such a handsome man would even give her the time of day. Still reeling from a night of delightful excitement, and knowing neither is ready for a committed relationship, Devon and Lilah go their separate ways knowing they’ll never cross paths again.

Fate works its magic when Devon runs into Lilah again at his best friend’s restaurant. Against his better judgment, Devon has agreed to run Market while Adam goes on a mini vacation. It seems Lilah is here because her best friend Grant, who also happens to be her roommate, got her a job bussing tables. Nervous about her first day on the job and about how to act with her new boss, Lilah is a mess. In the light of day Lilah realizes that Devon is not only devilishly attractive, he’s also arrogant, self-absorbed and sorely lacking in people skills 101. When he’s not scowling at the staff, he’s cursing up a storm scaring everyone around him. When Devon’s his ten-year old son gets dropped off by the police and he’s expected to watch him for a month while his mother is in alcohol rehab, Lilah glimpses a brief glimmer of vulnerability and fear as Devon wonders what to do. Nothing about this is what Lilah expects, but she’s determined to step in and save the day. As determined as Devon is to ignore this amazing do-gooder, he is nonetheless turned on by Lilah and her southern charm.

ON THE STEAMY SIDE takes a fresh look at romance as the writer introduces an inventive and fast-paced plot, peopled with richly developed characters and witty conversations to keep your interest. There’s a lot going on, including plenty of conflict, but the reader will fall in love with the main players, as well as becoming immersed in the lives of the supporting cast. This is evident with Frankie and Jessie, who work at Market are clearly in love, but both have a hard time admitting their feelings; Tucker, the artistically gifted young boy who desperately wants to spend more than the required month with his mostly absent father; Grant who normally tells his best friend Lilah everything, remains close-mouthed about why he has a problem with Christian, the talented bartender and Devon's father Phil Sparks, who never thought his son was good enough.

Edwards expertly delves into the potty-mouthed psyche of Devon to find out why he works so hard not to let anyone expose any of his weaknesses, and she chooses Lilah as the perfect woman to save him from himself, because she can truly see good in just about anyone. Much more than a simple one night stand, Lilah Jane proves that behind every good man is a good woman. Despite laughing throughout most of the book, and there are times that the reader may giggle out loud, there are some tragically tender moments that will tug at your heartstrings, and bring on the tears. Even better, some of the really neat recipes in the story are available for you to try in the back of the book. But if that doesn’t tempt you, wait until you read the teaser for the next in her Recipe for Love Series, CAN'T STAND THE HEAT, the next book in this series comes out in September 2010; my mouth is salivating now with anticipation. ON THE STEAMY SIDE is a solid effort from an amazing storyteller and worthy of a Perfect 10.

Cecile Smutty Hussy said…
I have seen great things about this book! One day I will get my hands on this book! Great review hon!!!!!
5:24 PM