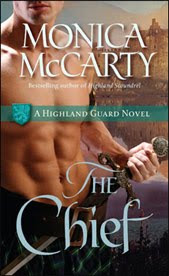 THE CHIEF by Monica McCarty
Out now!


The ultimate Highland warlord and a swordsman without equal, Tor MacLeod has no intention of being drawn into Scotland’s war. Dedicated to his clan, the fiercely independent chief answers to no one—especially not his alluring new bride, bartered to him in a bid to secure his agreement to command the deadliest fighting force the world has ever seen. The treacherous chit who made her way to his bed may have won his hand, but she will never claim his heart.

Although her husband’s reputation is as fierce as his manner, Christina Fraser believes something softer hides beneath his brutal shell. But the only warmth she feels is in their bed, in the glorious moments of white-hot desire that disappear with the dawn. When Christina’s reckless bid to win her husband’s love goes awry and thrusts them into danger on the eve of war against England, Tor will face his ultimate battle: to save his wife and open his heart—before it’s too late.

The trend on book covers right now are the nicely naked chests of the hero. Do like these type of covers, or would you prefer them to be clothed, the couple together...or what?

Post your thoughts and I'll put you in the pot to win this book.

Wow! Hot hot hot cover! Annnd, I love Monica's books, have 3 of them and now I have to have this one too!!

I prefer having the face with the chest shot.

I still like the old fashioned couples clinch shots!

Some of those covers are very, very nice : ) With a book like "The Chief", the cover is appropriate for the title and the story line of the book. It's important for me that the cover match the characters and story details. Different types of love stories are best served by different types of covers. Hopefully, for the author and for the reader, "The Cover Gods" will be merciful. I just read "Beauty and the Duke" by Melody Thomas, and I highly recommend it as a great romance read. However, the cover does not match the character and the story line! The heroine was a brunette, but had notably blue eyes, not brown eyes as shown on the cover. She was also a highly intelligent, educated woman who was recognized as an authority in her field of study. The cover and the back blurb of "Beauty and the Duke" actually deter from the interesting, uniquely attractive characters and the well-written, exciting and suspenseful love story. A much better cover for the book would have been to show both the hero and the heroine. Him with his family legacy silver-streaked hair, and her with big blue eyes and glasses. He loved to remove her glasses ; )

I love the naked chest covers! I hope it's a trend that doesn't end any time soon. This is a nice cover, but Irresistible by Lauren Dane takes the cake!

I do sometimes like a cover to with the couple on it. Margaret Mallory's series is a good example, and I hate to mention her again, but Lauren Dane's Laid Bare, Coming Undone, and Inside Out. Those are GREAT covers!

I guess I don't mind just the hero, clothed or not, or the couple, but I prefer covers not to just have the heroine on the cover.

I don't mind the naked chest. They are very nice to look at. I do like the couple together better though.

I love naked chest covers. They are so dreamy to look at.

Hey Patti!
I do like them, but I also like covers with faces. Without faces leaves my imagination to wonder and make up my own "man" for the story. With a face, I stare aimlessly at his face... and imagine those eyes..
So either way... just make sure they have half nakked!!!
Thanks for the chance to win!

I like the naked chest covers, as long as looks like the description of the actual hero in the story. I think that matching is more important to me than whether it's a naked chest, clothed chest, couple together, etc.

I really like this cover. The more naked they are the better I say..lol.But I wouldn't mind some of them having faces so I knew what they looked like.
This sounds like a good book too.

I love the naked chest covers and I don't care if they show his face or not if there's not a face showing I can make one up in my mind to go with the story in the book. I hate reading a book and the author describes the hero or the heroine in way and you look at the cover and it doesn't look anything like what she says.

I like the 'plain' cover with a sexy set-back inside! Stephanie Laurens books from the Cynsters original issues to the Bastion Club are like that. SL's new series the Black Cobra doesn't have that cover theme. Sabrina Jeffries' School for Heiresses covers had some pretty hot set-backs too!

On the other hand, I liked the covers of Candice Hern's The Merry Widows trilogy too! Beautiful art work.

For the most part though, I like the cover to match the H/H in the story.

I'd rather covers accurately show a scene from the book.

I can't help myself, I am usually pretty drawn in by the half naked males on the cover of books - mostly for the stun factor. I love eye catching covers, and wht's not eye catching about a half naked, well built man? Though frankly, it would probably be just as eye catching (though possibly in a different way) if it was a half-naked not-well-built man.

Love the cover! Nice chest. We could all use a little eye candy, no?

I'm all for the naked chest covers (I love Brenda Joyce's Master of Time series)! Although naked backs are good, too!

This way, the cover model won't clash with how the hero is described in the story.

It's a lovely cover. I don't mind the headless torso covers, but I admit I do like the clinch covers.

I'm not picky about book covers. I love covers with naked chests, but I also love clinch covers showing the couple or just a cover with a clothed man. Naked chests or clinch covers are more likely to draw my eye to books in the romance section of a bookstore than a scenic cover with a building or an outdoors scene.

I love this cover and I'm a big Monica McCarty fan... but I don't really pay attention to the cover when picking a book to read. Any cover is good for me!

I like the book cover to show some skin...be it the man's or the woman's. A sexy cover catches my eye.

Love the naked chest covers! But I'd also like to see their faces..

There are so many naked chest covers that I think it is becoming boring and that the unexpected is more likely to catch my attention. I'm also tired of the headless torso shots.

Hmm...Both Naked chests and couples together are both nice, so I'm good either way! :-) If the book inside is good also, all the better :-)

I like the naked chest covers. They are hot. Monica's book sounds great.

I totally love a naked man cover. Perfect is in jeans unbuttoned, slung low with a hair chest. But not ape like. LOL

I'd love to be entered!

Definitely like to see some six pack abs but I'd like to see the whole person as well - kinda tired of the headless thing. Someone resembling the characters in the book would be nice...annhonATaolDOTcom

Seeing a naked chest never did a girl anyharm...ah well maybe, but on a bookcover.. well thas okay..
Personally I it would do me good to see more of both.. Love Monica's books..

I would prefer the couple clothed. I am so tired of hearing my husband's comments about the half naked guys on the cover of the books I read. I could sure use a break from that.

I do love the chests! I like a variety so when I see them or just the head or the beautiful total chest and above its great to see.

I love the chest shot! Mummm. This Chief is meant to be mine! LOL

It's absolutely my favorite kind of cover. I like the face to be partially hidden so I can imagine him as I see him. I've enjoyed many of Monica's books and I'm sure this one is a winner too!!!

If it'snot to late I'd like to be entered. Thanks