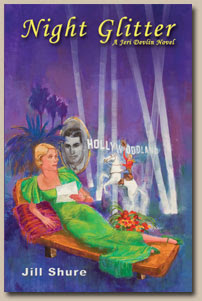 1. Tell us about your newest release.
The novel is called NIGHT GLITTER and it’s a sequel to my novel NIGHT JAZZ, a Ben Franklin Winner. The first novel begins in 1929, when my main character Jeri Devlin, a modern young woman accidentally goes back in time to the first day of the stock market crash of 1929. There she falls in love with Lex Rose. In NIGHT GLITTER her story continues. By now, it’s the Great Depression and she and Lex are facing challenges in their relationship as well as the times. So Lex has serious health issues and ends up in a sanitarium for long term care. On top of this, Jeri discovers they’re broke. In order to pay for Lex’s care, she heads to California hoping to find work in the movies which is much harder than it looks. She ends up fighting to sidestep some of the less savory things girls of the times did in order to survive.
I also finished a companion cocktail recipe book called NIGHT CAPS, which uses excerpts from both novels and uses drinks from the past and present to represent the characters in the novels.
2. Can you tell us a little about your favorite scene in the story?
It’s hard to choose just one! I have two sad ones. One when Jeri and Lex’s friend and employee Harris take Lex up to the sanitarium and have to leave him there. And the other when Jeri and Harris part at the old Pennsylvania station in New York before Jeri heads out along to California.
And I have two favorite funny scenes with a character named Lupe Cardona known as the Guadalajara Spitfire. One when she’s meeting her lover at a grungy bungalow colony at the beach. And the other is when she breaks into a producer’s office and makes all sorts of hilarious threats.
3. When did you first realize you wanted to be a writer?
I wrote stories as a child. My mother was very encouraging about it and hoped I’d become a writer.
4. Where do you get your information or ideas for your stories?
Everywhere. The ideas come in the shower, while driving, you name it. I have no shortages of ideas. I just don’t have the time to write them all.
5. What would you say is your interesting writing quirk?
I love going out to coffee shops to write, a popular thing to do these days. Writer Natalie Goldberg suggested this in one of her books years ago, and I found it really works for me. No interruptions, a certain amount of background noise, and the company of strangers.
6. What was one of the most surprising things you learned in creating your books?
How inspiring the process is. And sometimes there’s a moment when the writing flows so well and I know I’ve written something which pleases me and I know will please my readers. That’s always a great experience.
7. What authors or friends influenced you in helping you become a writer?
Herman Wouk, for starters. His MARJORIE MORNINGSTAR is still my favorite novel. I also love funny books so naturally I’m crazy about Janet Evanovitch, and Donald Westlake. In the historical vein, I adore Anne Perry and Fiona Buckley for their historical mysteries.
8. What does your family think about your career as a published author?
They’re all very excited and proud. My friends, too. They’ve become fans.
9. Besides writing, what other interests do you have?
I love to paint, read, see movies, travel, and play with my three long-haired dachshunds and my cats, namded Izzy, Roxie, Lucia, Elwood and Abigail van Puss Puss.
10. Can you tell us about what’s coming up next for you writing wise?
There may be a third book in the “Night” series which will move forward in time. Otherwise, I’m writing a really funny mystery series that I’m very excited about starting with the novel, A CLAUSE FOR MURDER.
*****
Learn more about Jill by visiting her web site at JillShure.com or her blog at JillShureis.blogspot.com
at March 22, 2010

Hi, Jill! Glad to learn more about your writing and books! I haven't read many titles set in that time period--how did you choose it? (Or did it choose you? ;)) Congrats on your second book!

I appreciate your comments. I'd have to say those two eras chose me. I am a great fan of history and the early 20th Century always intrigues me. There are so many things to love from the music, early films, early radio, movie stars, modern advertising, fashions, writers, and early air travel.

That is an era that's rich with possibilities! I recall reading only one story set around then, and it definitely tied in to the early air travel--there was definitely much going on then!

Thanks, Jill! The cocktail recipe book sounds like a very fun tie in! That'd be a fun pair to do in a book club! :D

I don't see much time travel reads to the early 1920's, so it sounds like a unique series! A joy reading about this and meeting you. Shall be visiting your site and finding more info!

Hello, Caffey! It is wonderful to meet you, as well. I loved seeing how my heroine adapted to life in the 1920's, especially during the stock market crash. Thank you for your interest! I hope you check out the series--I know you'll love it!