Too Wicked To Kiss is a Gothic romance with a murder mystery at its core. The hero is the most likely suspect, and the heroine is determined to unmask the killer... no matter who it might be. Here is the back cover copy:

HIS TOUCH HOLDS HER CAPTIVE...

From the ravens circling its spires to the gargoyles adorning its roof, Blackberry Manor looms ominously over its rambling grounds. And behind its doors, amid the flickering shadows and secret passageways, danger lies in wait.

TO HIS EVERY DARK DESIRE...

Evangeline Pemberton has been invited to a party at the sprawling estate of reclusive Gavin Lioncroft, who is rumored to have murdered his parents. Initially, Gavin's towering presence and brusque manner instill fear in Evangeline...until his rakish features and seductive attentions profoundly arouse her. But when a guest is murdered, Evangeline is torn. Could the man to whom she is so powerfully drawn, also be a ruthless killer?

TOO WICKED TO KISS

Before kindergarten... I literally cannot remember a time when I didn't want to be a writer. I wrote short stories, long sagas, many a first chapter or first-hundred-pages that went nowhere, poetry, songs... just about anything. I was on both my high school newspaper staff as well as the yearbook staff, and loved it. Shortly thereafter I read my first romance novel (Once a Princess, by Johanna Lindsey) and from then on, my course was set!

I like to daydream about redoing something familiar in an unfamiliar way. If I see an interesting idea in, say, a horror movie or a comedy sitcom, or read a strange-but-true fact in the newspaper, I'm instantly brainstorming, "What if this happened in Regency England?" and combining one element with another until I have something totally new. 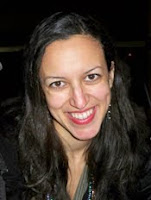 As my friend Carrie Ryan would say, I have plenty of myths about how I write. Gotta be first thing in the morning, no music or other distractions, 1.5 cups of coffee down the hatch already... And truly, those are my ideal conditions. I've discovered, however, that I can write hunched over a table in a busy cafe, or with the window open to the sound of children shouting in the park below. Just like when I'm reading a good book, when I'm immersed in the lives of my characters, reality disappears, and the only world I'm aware of is the one I'm creating with my keyboard and my imagination.

That it's harder than I ever anticipated... and twice as fun! Pushing myself through the rough patches really helped me to grow as a writer. Sharing scenes with my critique partners and talking shop with my published friends really helped me to achieve a more balanced view of the industry as a whole. So I guess the most surprising thing was that no matter how solitary the physical act of writing is, I very much feel part of a tight, supportive community.

Oh man, this is going to be a list! LOL. First and foremost, joining Romance Writers of America was the smartest thing I could've done. Joining TARA (my local writing chapter) was the second. The Tampa chapter boasts treasures like Betina Krahn, Virginia Henley, Julie Leto, Karen Rose, Roxanne St Claire, Sue Kearney, CL Wilson, and Diana Peterfreund, all of whom are savvy, classy, friendly, talented authors. My critique partners (the one-time Manuscript Mavens) are Darcy Burke, Jackie Barbosa, and Lacey Kaye. And I would not have found them if it weren't for the infamous Avon FanLit of a few years ago, where I also met my friends and fellow writers Tessa Dare and Courtney Milan. Eloisa James is one of my all-time favorite people--to know her is to love her. There are so many others who have befriended me or shared knowledge with me or dished industry news with me over margaritas that I can't even begin to count!

At the beginning, my grandmother was pretty much the only other person of my acquaintance who thought "career" and "writing" sounded just fine together in the same sentence. My family is well-meaning, but thought a "real job" might be the wiser pursuit. Four years later, I've finally got a book on the shelves and they couldn't be prouder of me. In fact, as soon as pre-orders became available, my mother drove straight to the closest bookstore and ordered 22 copies!

A connected book tentatively titled Too Sinful To Deny will be out in 2011. And in the meantime, I'm working on proposals for more Gothic historical romance!

Thanks so much for having me here today!!

I have so much fun reading this book. I have it out on Goodreads with my short review and have gotten some of my friends to put in their wishlist as they should!! Great debut!

Congrats on the release of TOO WICKED TO KISS. I enjoyed it so much. I only wish we didn't have to wait an entire year for the next book to be released!

Speaking of the next book, will it also have gothic or paranormal overtones or will it be a straight historical?

Anonymous: Thank you so much for spreading the word! I'm glad you enjoyed the book!!

PJ: LOL, you and me both! I thought the countdown to Too Wicked To Kiss was hard, but waiting even more for Too Sinful To Deny is killing me! 2S2D will also be a Gothic historical, although this time on the fringes of pirate country in Bournemouth, England rather than a house party in a medieval mansion. I had a blast writing these books!

I've loved ready some excerpts from the book and can't wait to get to the bookstore to grab a copy. What are you reading right now? and do you find your own writing influenced by what you read?

When I'm not writing, historical romance remains my top pick. When I am writing, I prefer to read out-of-genre. I might catch up on my to-be-read stack of thrillers or mysteries or romantic suspense.

Erica did a great job setting the scene complete with dark towers and ravens, blood colored hangings, trolls on the ceiling, vomit colored furniture- with a funny twist nearly at the end. Then there's the secret, spider-infested passages and any one of a number of people creepy enough to be murderers.... good fun! Ya gotta read it!

Erica - When exactly will you be releasing "To Sinful To Deny" in 2011?

MariElle: Thanks so much!! I had so much fun writing this book... I'm glad you enjoyed it!

Liza: I wish I knew! The production schedule isn't finished yet at the publishing house, but I'm hoping to find out exact dates soon!