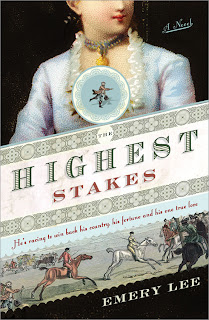 Emery Lee, author of THE HIGHEST STAKES, answers questions for us today. Give her a big, warm welcome and say hi!

The HIGHEST STAKES is an epic novel of thwarted love, ambition, deceit, betrayal, adultery, murder… and horseracing! The tale is set in mid-18th century England and Colonial Virginia, a time of high stakes gaming horseracing, when the thoroughbred as we know it today first emerged from the stables of the rich and powerful.

Writing is something I have dreamed of all of my life, but never would have imagined actually doing. I have always had a decent command of the written word in a technical sense, but never believed that I possessed the imagination for creative writing. I took my first stab at writing a Romance back in 1986 but I never got beyond the first page!

I just never had a story until THE HIGHEST STAKES literally entered my dreams.

THE HIGHEST STAKES was born out of my love for history and horses. My original premise for the novel was a pre-revolutionary drama/romance set in Colonial Virginia and the Carolinas in which the main characters were horse breeders. I read at least a dozen history books and spent hundreds of hours in research until I felt ready to write. I began the novel with a prologue set one generation earlier than my actual story. My intent was only to provide background for the characters and the horses, but these first figments of my imagination came to life in such a powerful way that they stole the story!

I don’t know if the same goes for most writers, but I have almost no command of my creativity. It, rather, commands me!

It is despairing at times to sit for hours staring at the computer screen while under a deadline, with my mind blank as a slate, only to awaken hours later in the middle of the night with all the thoughts and ideas that I couldn’t conjure up at a more reasonable hour!

I also never write without Bach or Handel setting my mood. Since I concentrate on the Georgian era, I only listen to baroque music. I never tire of it.

When engrossed in my story, I experience a state of utter timelessness, hours and hours passing like mere minutes.

That I can write! (I pray no reviewers will gainsay me on that declaration!)

I am ever thankful for the support of my fellow members of Georgia Romance Writers, author Diane Gaston, and my agent Kelly Mortimer, but I never would have even begun writing had it not been for my friend Diana Maynard.

September of 2007 while were riding the Rocky Gap horse trails, I first mentioned this crazy idea of writing a novel. Like the Nike ad, Diana said, “Just do it!” A week later, and coincidentally on my birthday, I found a package from Diana at my front door. It was a book on writing. I began that very weekend, completing my first draft fourteen months later.

While struggling to write, I received unfailing support from my husband and two sons, but once finished, I asked the most critical person I know, my sister Michelle, to be the first to read the manuscript. She was under extreme duress at the time, with no escape from the airplane cruising at 30,000 feet, but one chapter after giving me the death glare, she was irrevocably hooked.

My husband has been incredibly supportive of my every endeavor during our twenty- seven years together, but was certainly taken aback with the news of my novel's acceptance by Sourcebooks in January 2009.

My eldest son Sean tells me it’s a best seller! (The faith of a mustard seed…)

I am completely enthralled with the yet unwritten history of Philip and Sukey, two secondary characters that could have easily stolen the show. I hope that readers of the HIGHEST STAKES will agree, and their tale will be told.

Beyond that, I would like to continue the colonial equestrian theme and end the saga with my original book idea; otherwise, Ian Drake and Madeleine Roberts will only live to haunt my dreams!


Learn more about Emery by visiting her web site at authoremerylee.com
at March 31, 2010