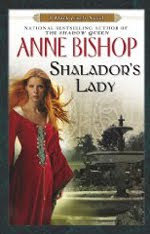 In QUEEN OF THE DARKNESS, Janelle destroyed the corrupt and horribly evil queens and their warlord princes who had ruled the realms with a storm of power. She barely survived, but now lives in Kaeleer, the Shadow Realm, with her husband and consort, the Warlord Prince Daemon. Throughout the realms, all those with magic are of the Blood; those who wear jewels have the greatest power, and the darker the jewel, the greater the power. Jeweled Warlord Princes and Queens rule the other Blood and the landen, or non-Blood.

The territory of Dena Nehel and the Shalador reserves located within this territory suffered from malevolent queens before the witch storm. No Blood females remain who are capable of becoming queen. In SHADOW QUEEN, Theran, the last Prince of Grayhaven, asked Janelle for a queen. She gave him Lady Cassidy for one year. Cassidy is a Rose Jeweled Queen, tall, plain, hard working, and far from aristocratic. She came to Dena Nehele and Grayhaven Manor to serve a territory where the laden hate and distrust the Blood as much as the Blood distrust the queens and to a land nearly as broken and ruined as its people. She set to work and accomplished what only a good heart and caring soul could, but she had her demons, too. In her first court, her Warlords rejected her for a prettier queen.

While Theran became First Escort in Cassidy's court, and one of the twelve Warlords in Cassidy's First Circle, he cannot accept her as Dena Nehele's Queen. When Lady Kermilla comes to Grayhaven to ask Cassidy for money, he meets the queen he is destined to serve. He is blind to her selfish greed, a trait that started the old queens down a road of ruinous corruption.

When Cassidy discovers the queen who took her court away from her once is welcomed in Dena Nehel, she fears her current court will desert her, so she flees. What she cannot imagine is that the rest of her First Circle will remain loyal and follow her. A schism between present queen and future queen soon begins to rip Dena Nehel apart, and it seems nothing can save the realm from more bloodshed.

This long introduction is necessary, for if you haven't read the Black Jewels novels, you will be confused by the story. However, the Black Jewel novels are seductive—once you start, you just cannot stop reading. There is the specter of battle and bloodshed, but threatened war is not all that drives the tension. Cassidy's plight, with the needs of Dena Nehele and its people and with the desperation of the Warlord Princes, will keep you on tenterhooks. SHALADOR'S LADY takes you on an emotional journey of dread and hope involved in an uncertain recovery. Characters from previous novels play important secondary roles, and Sceltie (pronounced 'sheltie'), Kindred dogs who also wear jewels of power, add humor while herding their people in the right direction. You must read this fantasy novel, but read a few of the other Black Jewel novels first so you can glean the greatest pleasure. Even given this small drawback, SHALADOR'S LADY still earns a Perfect 10.