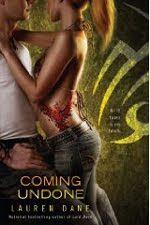 Since moving into the quiet Seattle neighborhood, Elise Sorenson has spent quite a few nights fantasizing about the bad-boy biker who lives across the street. She has no room in her life for a man right now, and no desire for a relationship, but it’s nice to know that after the hell she’s been through that her libido is still alive. When a car runs into her neighbor on the street, Elise uses her first-aid knowledge to help and gets her first up-close look at the sexy man, which only fuels her fantasies more.

The little girl he’s seen across the street leads Brody Brown to the assumption that a new family has moved in and, while the mother is definitely good looking, Brody’s not about to mess with a married woman. It’s not until he thanks her for her aid after his accident that Brody realizes that Elise is a widow, and now he can’t seem to get her out of his mind. A second meeting, which leads to a dinner invite from her almost seven year-old daughter, Rennie, only has Brody more intrigued, and the kiss that follows is proof enough for him that there will be something between him and the beautiful Elise. Even so, he’s still a little shocked when she readily agrees to a “friends with benefits” arrangement, and is more than happy to abide by her ground rules.

While the sexual relationship between Brody and Elise happens quickly and is hot enough to singe the fingers, it’s the slow build-up of a deeper relationship that makes COMING UNDONE such a treat to read. The large, Harley-riding owner of a tattoo parlor, Brody definitely gives off the impression of a bad boy. However, he’s also the man who, at seventeen, put aside his own dreams to raise his younger siblings after their parents’ deaths, encouraged them in their own artistic endeavors, and was devastated at the loss of his niece. Readers learn right away that Elise survived an abusive relationship, and though it made her stronger, she still struggles with what she sees as her failures and the mistakes she’s made. She enjoys her time with Brody, but is too afraid of making another mistake to truly trust in a relationship.

Along with the strong romantic element to the story, COMING UNDONE is also about family. Brody’s rock-star brother Adrian is in and out of the story, visiting his home between tours. His sister, Erin, (featured in Ms. Dane’s book LAID BARE) is settling into life with her two men, Todd and Ben, and befriends Elise right away. The Brown family has a close-knit group of friends who quickly accept Elise among them, and Elise’s parents arrive and make themselves at home with her new life. Not to be forgotten is Elise’s precocious daughter Rennie, who steals quite a few scenes.