A Perfect 10: ICE by Linda Howard 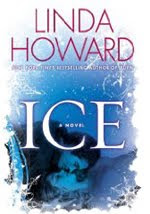 After losing his wife three years ago, Army Sergeant Gabriel McQueen hasn't been able to see his son Sam as often as he'd like. Gabe is stationed in North Caroline, while Sam lives with his McQueen grandparents in Maine. This trip home is especially precious with Christmas coming up. But for now, it's just a quick hello and goodbye because, with a wicked ice storm on the way, Gabe's father asks a favor of Gabe. Sheriff McQueen hasn't been able to reach Lolly Helton, who's alone at her parents' former home on a mountainside outside of town where cell phones don't reach. He wants Gabe to alert her to the coming storm and bring her into town. Gabe's less than enthused at leaving Sam or to confront the stuck-up girl he used to tease in high school. But as a military policeman, Gabe is used to heeding duty's call. It's a race to get to Lolly and back before the storm hits.

Gabe's training proves invaluable in the hours ahead, for when he gets to the old Helton place, he finds Lolly being held prisoner by armed meth-heads.

Lolly wasn't so much stuck up as insecure, but she's made a good life for herself in Portland; she came back to Wilson Creek to ready her old home for sale. But now she's sure she's going to die . . .

ICE is unique in my reading experience. It's a terrific novel of suspense in which two people are pitted against a killing storm and a pair of drug-crazed murderers. At the same time, it's a warming romance between the once shy sophomore and the popular high school senior on whom she had a crush. Even though Gabe and Lolly face horrific challenges, their growing relationship is a delight. So as the plot chills the bones, the romance warms the heart. One could call ICE a book of contrasts, for parallel with the heat and cold, the points of view alternate from Gabe's and Lolly's to Darwin's and Niki's, a nasty pair if ever there was one.

Talented author Linda Howard packed a lot of story and heart in just under 200 pages. ICE is a small masterpiece that still gives me pleasure when I think about it. It richly deserves a rare Romance Reviews Today Perfect 10.

This book is available at my library, so I have put a copy on hold.. Thanks for the recommendaton. I look forward to reading this book..