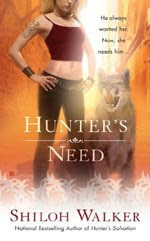 In the four years since Analise Morell used her psychic gift to lure Duke into the clutches of a feral vamp, thereby making it possible for the Hunters to rescue not only Duke, but also Ana and her brother Brad, she has learned a lot. Her time at Excelsior taught her to control her gift, that she’s not strong enough to be a Hunter, and finally, while they may have allowed her to live at the exclusive school, nobody really wanted her there. She still wants Duke, but after the way she betrayed him, Ana is lucky to be alive----hoping for anything more would be ridiculous. Knowing it was time to move on, Ana struck out on her own.

Now, a year later, Ana’s built a comfortable life for herself in Alaska, far from the paranormal and gifted beings. An encounter with a homeless man changes things for Ana. Initially suspected of killing his girlfriend thirty years earlier, Paul wanders the town, often talking to himself, and mostly people think he’s crazy. Ana sees the desperation in his eyes, though, and knows that he’s neither crazy nor a killer. She feels the pull to find out what happened to his girlfriend, and during her investigation, she realizes that there is something wrong in Anchorage. Something she needs a Hunter’s help for.

The last place in the world Duke Lawson wants to be is anywhere near Ana Morell. He can’t forgive her betrayal, but he also can’t forget how much he wanted her that night five years ago. With no one else able to travel to Alaska, Duke’s going to have to figure out a way to work with her. It doesn’t take him long to get the answer to a question that has haunted him for years though----Ana wanted him that night just as much as he wanted her----and she still does. As they deal with the mysteries she’s uncovered, Ana and Duke finally get a chance to explore what has been between them since their first meeting.

They’ve been fighting it for years, but things finally come together for Ana and Duke in HUNTER’S NEED. After being rescued, Duke and the other Hunters realized that everything that Ana did, she did to keep her brother safe, and while he can’t condone her actions, Duke at least understands. Forgiveness is another matter entirely, and impossible until Duke is willing to admit that he was emotionally hurt by her actions. Ana doesn’t expect forgiveness or anything else from any of the Hunters. She’s shocked to find out that Duke is still attracted to her and, though she knows she’ll be hurt when he leaves, Ana is willing to take what she can get.

Ms. Walker has created an interesting world with her Hunters series, and it is probably best to read the previous books in order to get the full impact. However, the relationship between Ana and Duke takes place far away from the other Hunters, and with minimal contact with any of them. This book also focuses so completely on their romance and the mystery they find in Alaska, that it does pretty well as a stand-alone tale. Either way, HUNTER’S NEED is a riveting tale that I couldn’t put down and wanted to read again as soon as I finished. Which is why I am awarding it a Perfect 10 and highly recommending you pick up your copy immediately.

I have this in tbr pile! After reading this review, it will go to the top!!