Book Giveaway: A STORM OF PASSION by Terri Brisbin 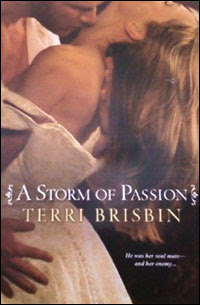 A STORM OF PASSION by Terri Brisbin

In the first of a breathtaking trilogy set against the stark beauty of medieval Scotland, one man discovers a surprising past, a remarkable gift—and a terrible destiny…

Once, Connor believed that his ability to see the future would grant him everything. Instead, it landed him in a prison of his own making. Summoned by the Lord of the Isles to serve as his counselor, Connor gains wealth and prestige, but with every vision, his own sight dims. Even so, Connor doesn’t grasp the terrible consequences of his gift until he’s wounded by a young woman who blames him for her family’s massacre.

Moira curses herself for failing to kill the Seer—especially when she learns her punishment is to be given to him as a slave. Far from the proud, arrogant tyrant she imagined, Connor is a tortured man with a dark sensuality that tempts her night after night. But freeing him from a strange power that is spiraling out of control will mean forsaking her vow and risking her heart for the one man she has sworn to destroy…

Set in Scotland, this story sounds really good. Want to win this? Then you can enter by answering this question:

What country (besides the one you live in :) ) would you like to visit?
(Okay, you can list more than one country)

One entry per person and I'll announce a winner on MONDAY night (to give everyone a chance in case they are busy over this weekend).
at December 24, 2009

I'd like to visit Scotland one day, gotta find me a man in a kilt, lol. Happy Holidays!

Scotland! My husband and I want to travel there after the kids are old enough.

My 2nd choice is Mexico, I want to see the Pyramid of the Sun.

I've always wanted to visit Australia, the land of down under!

I too have always wanted to visit Australia.

I'd love to see Ireland. So much mystery there!

I'd really like to visit Australia with England and Scotland running close 2nd and 3rd behind!

I would love to visit Italy. Happy Holidays

I'd love to visit Scotland. And since I'm already that faraway, let's add Ireland, England, France, and Italy.

I would love to visit England.

I would love to visit Japan.

I would love to visit Ireland.

Scotland is it for me....just want to hear that wonderful sexy accent in person some day!!! Add a man in a kilt and I know I'd be in heaven!!!

Happy Holidays to All!!!

I'd love to go to Australia

Gosh I have so many...
I would love to go to British Isles- Scotland, Ireland, England and Wales.
Exotic Japan would be fun too.

I am of Scottish descent, and I have always wanted to visit Scotland. "Small, but mighty", Scotland stirs the imagination. Also, Scotland produced Gerard Butler, who is "mighty fine" : )

The land down under, Australia!

I'd love to visit Scotland, Italy and New Zealand.

It has always been my dream to visit Australia.

I've always wanted to visit Scotland since reading the Outlander series...and all of my other fav highland romances. Terri's book sounds fantastic and can't wait to read it.

I would like to visit Scotland and Ireland.
This book by Terri sounds really good. I have been a fan of hers for awhile now.
JWIsleyat)aol(dot)com

I would love to visit Egypt.

Hubby and I have always wanted to visit two together, Great Britin and Australia.

I've always wanted to visit Italy. One day I will go to Rome!

I have always wanted to visit Ireland and all its' haunted castles. I would also love to visit Scotland for the same reason.

I really enjoyed the blurb of A STORM OF PASSION.