Spotlight Review: THE MOST WICKED OF SINS by Kathryn Caskie

THE MOST WICKED OF SINS – Kathryn Caskie 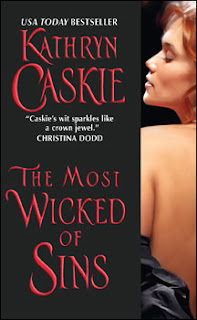 We’ve all heard of the seven deadly sins, but here we have a different kind of seven deadly sins. Here we are referring to the seven children of the Duke of Sinclair. The Duke, at home in Scotland, has sent his seven children into London with just enough monetary support to get by. Their shenanigans have tried his patience, and now he especially wants his daughter, Lady Ivy Sinclair, to get married to a fine, upstanding, moderately wealthy man and become the kind of daughter he can be proud of. To ingratiate herself with Papa, Ivy has finally settled on the oh-so-worthy Lord Tinsdale. At Almack’s one evening, Ivy is waiting for Lord Tinsdale to finally declare himself when he spies the Irish beauty Fiona Feeney and takes her lemonade to the chit. Ivy is dumped, but her mind is going a mile a minute until she comes up with a plan to get Tinsdale back before her father comes to town and casts her out of the family. Now all she needs is a man…

Ivy’s plot is something only one of the Seven Deadly Sins could come up with. She will hire an actor, rent the townhouse of the Marquess Counterton, who has recently died (and society is waiting for his heir to appear), and pretend to be enthralled with him. Then the actor will pretend to notice Miss Feeney and take her away from Lord Tinsdale, and Tinsdale will come back to Ivy. Surely this is a most brilliant plan, and after Ivy kisses her actor, Dominic Sheridan, she can tell from his kiss that he is everything a woman could want in a man and will perform his task admirably.

Nick Sheridan is nonplussed at the idea he is the center of Ivy’s plot, but after that first kiss he is willing to do whatever she wants. Of course, what else could we ask for than he actually is the new Marquess Counterton, just come into town to claim his estate. Now he can find out why servants in his house are renting it out to Ivy for the nefarious scheme. For some reason, Ivy’s siblings are helping her, and the plan is on to get Lord Tinsdale to offer for her before her father comes to town. But the longer Nick is in Ivy’s company, the more he wants her to forget her plan and take a chance on him. As Lord Tinsdale gradually notices Ivy again, and her plan is coming into fruition, her feelings for Nick keep coming up. Will Ivy’s crazy plan work, and can she accept Lord Tinsdale’s offer after she’s kissed Nick? Such a cute and sweet story is sure to keep you interested.

Kathryn Caskie introduces us to the world of the ton and the beautiful people in London, including the Sinclair brothers and sisters. Written from Ivy's and Dominic’s points of view, we can put ourselves in Ivy’s place as the plot thickens to regain the regard of her father. The story is different and takes many surprise twists and turns as Ivy waits for her plan to succeed, and Nick does his best to make her believe that they are meant for one another.

The secondary characters include Miss Feeney, Lord Tinsdale, and Ivy’s brothers and sisters who are all part of a totally unique family. I can just imagine that life with that family was a wild and crazy ride.