Book Giveaway: A DUKE OF HER OWN by Eloisa James 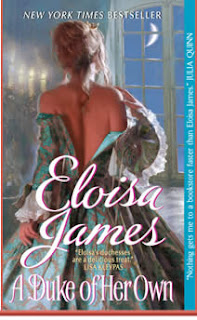 A DUKE OF HER OWN by Eloisa James
Out now!

A Duke of Her Own


Leopold Dautry, the notorious Duke of Villiers, must wed quickly and nobly—and his choices, alas, are few. The Duke of Montague’s daughter, Eleanor, is exquisitely beautiful and fiercely intelligent. Villiers betroths himself to her without further ado.

After all, no other woman really qualifies.

Lisette, the outspoken daughter of the Duke of Gilner, cares nothing for clothing or decorum. She’s engaged to another man, and doesn’t give a fig for status or title. Half the ton believes Lisette mad—and Villiers is inclined to agree.

Torn between logic and passion, between intelligence and the imagination, Villiers finds himself drawn to the very edge of impropriety. But it is not until he’s in a duel to the death, fighting for the reputation of the woman he loves, that Villiers finally realizes that the greatest risk may not be in the dueling field…

But in the bedroom. And the heart.

To enter this contest, just post away and I'll announce a winner later in the week.

The book sounds great and Eloisa James is always a favorite author.

I would love to read the new James!

Those dukes are devils! I would love to have "A Duke of My Own". They just don't make 'em like that nowadays...I guess that's we why love Historical Romance!

I don't believe I have read any of Eloise James books.. So this would be a good book to start with..

Eloisa James is one of my favorite authors. Would love to have a copy of her latest book!

A DUKE OF HER OWN sounds like a great read!

This only book in this series that I haven't read yet so please enter me in. Thanks!

I love her books!! They are always wonderful.

I love her books!

I've never read an Eloisa James book, but I've heard they are really good! Love the cover and blurb to this one!

I' a big fan of Eloisa James books. Count me in!!!

This has been a wonderful series! I am eager to read this last book.:-)

Eloisa James was one of the very first historical romance authors I ever read. Love her work!

I'd love to add this one to my collection of Ms James books.

;) Actually I've been meaning to get a copy of this book... Good luck everyone!

Sounds like a great read!
throuthehaze at gmail dot com

Oh! Sounds like a good read. Count me in. Thanks.

I always enjoy her books. Would love to win this one.