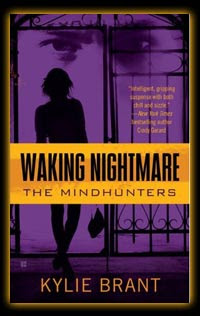 A serial rapist is on the loose in Savannah, and the police department is beside itself trying to get enough detectives on its task force. Ryne Robel is in charge of the task force, and hoping for another investigator, not a short woman who says she’s a forensic psychologist, or a profiler. He doesn’t care if she trained under the great Adam Raiker, former FBI profiler, he needs a cop, not a shrink. But his Commander doesn’t see things the same way, and little Miss Abbie Phillips is now on the team. So far their investigation has come up with no common threads to draw the victims together: work, friends, leisure time activities, nothing they can find that helps them figure out how the rapist chooses the victims. But something is different; the women aren’t just raped; oh no, this man wants much more. He injects each victim with some kind of drug that leaves them barely able to move, and yet exaggerates the pain he inflicts as he tortures them. And then, at the end, he leaves them in a position that is the victim’s worst nightmare. You know, in a small room if you’re claustrophobic, in a tall building if you’re afraid of heights, or underneath water if a woman once almost drowned. How does the rapist know these things about each of the different women?

Abbie Phillips was trained by a highly regarded forensic scientist, she’s used to the kind of reception she’s received and is confident her addition to the task force will bring the crimes to an end. Gradually Ryne trusts her findings, and she is more than surprised that he seems interested in her. It’s been so long since she’s had a private life she isn’t quite sure whether it’s worth the trouble and the secrets it’s bound to uncover. Abbie has break-ins and other things happening at the place where she is staying, and feels it could be her sister Callie. Abbie and Callie’s past is like a roaring lion, and its sickness and how it’s still an active part of their present is always between them.

Abbie and Ryne get into the intricacies of the crimes, along with the problems that her sister Callie brings with her. Abbie and her sister’s youth was a living hell, and it still comes between them, a sort of poison that lingers. Ryne quickly establishes a good working situation as they try to get into the mind of the rapist. Everything about the rapes is difficult to figure out, and the story will lead you a merry chase.

I have read many of Kylie Brant’s books, but WAKING NIGHTMARE has reached new suspenseful heights. Written from Ryne's and Abbie’s points of view, and sister Callie’s, the action is fast and furious, and the clues sometimes are hard to find and difficult to figure out. Ms. Brant has intertwined Abbie's and Ryne’s previous traumas into the story and made them a vital part in the search for the rapist.

To further flesh out of the story, there are the raped women and their stories, and other detectives who resent Abbie and don’t think she has anything to add to the investigation. One detective, McElroy, becomes dangerous in a way nobody could have predicted. Abbie’s sister Callie has perhaps the most trauma in her life, and their relationship is difficult, disturbing, and dangerous.

WAKING NIGHTMARE is indeed a nightmare that will get all your juices flowing. The Mindhunters Series will follow with WAKING EVIL and WAKING THE DEAD in October and November, and perhaps more to come. If you like mysteries, crime books, or intricately woven stories, WAKING NIGHTMARE is just right for you. But beware: be careful if you’re easily scared or prone to nightmares.