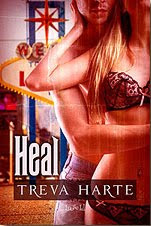 Arlin could be a pack Alpha someday, but at eighteen-years old, he’s really just interested in enjoying life and all of the pleasures that go along with it. However, he really can’t turn down Hunt Winter’s request to protect the woman who recently saved the life of one of his pack members. It’s too bad that Ruth, the veterinarian in question, is such a prissy little thing, because frankly she smells like great sex to Arlin.

Ruth can’t deny that when she first met Arlin she had a moment of carnal interest, but really, what woman needs the trouble such a pretty boy is bound to bring into her life? Not one with her past, so, when he shows up determined to protect her, Ruth is equally as certain that though she’ll accept his protection (after all, experience has shown weres are nothing if not scary) she won’t be giving in to her newly discovered primal instincts by having sex with him. Nope, not even once. Okay, maybe once, but really she’s older than him, so anything more would just be, well, wrong.

Arlin may be young, but he’s no fool, and when it turns out that his generally less than trusting nature might be justified, he could be all that stands between Ruth and a past she’d rather forget.

There are definitely some things in Ruth’s past that she needs to HEAL from. The death of her natural parents during her childhood was particularly nasty and she herself experienced something horrible that no woman should have to endure not that many years ago. It’s understandable that she’s grown into a woman who wants to control everything around her and fears her own instincts. Unfortunately, the caution she’s practiced has led her to becoming the “ice queen” Arlin first meets. Luckily, there’s nothing like a hot-blooded man to bring out your inner wild thing. While Arlin at first appears to have everything, a solid position in the pack, a few people he can count on for some hot and heavy sex, and a future that looks to be bright, he’s missing something. Arlin doesn’t think of himself as anyone’s first choice and it’ll take a woman like Ruth to make him see the truth, that he’s worth it all to one who loves him.

Many of the secondary characters in this tale, okay, nearly all of them, come from previous Alpha books (see www.loose-id.com for a complete listing). Understandable really since Arlin is related to most of the main characters from those stories. People like Dek and Leila (his grandparents), Rome (his uncle), Lowell (Arlin’s dad), Tala (Arlin’s sorta cousin and sometimes lover) along with her mate, Hunt and their pack-mate, Dunne (the were Ruth saved) are all present and accounted for here. Lupe is new to the Alpha series, an omega wolf who’s led a rough life, he admires Ruth and is eager to find acceptance in his new pack. Dio is the leader of the Hollin pack, a true scum-of-the-earth type wolf, he’s very interested in getting close to Ruth and has the necessary ally to get his chance.

If you like your weres and your sex rough, ready and intense, you’ll love this tale. None of the weres in the Alpha series are big on romance, but when they claim their mates, there’s no doubt there are feelings involved. Proving once again that what one person thinks is a bit too far out there is really just an awfully good time when it’s done with the right partner or partners, Treva Harte has penned a stimulating book that shouldn’t be passed up. Get your copy of HEAL today, and if you haven’t read the rest of the series, grab them as well. After all, one can never have too many hot weres! :-)