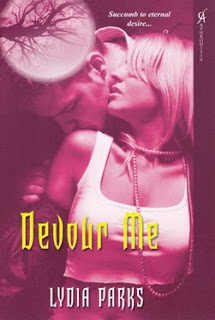 My newest book, DEVOUR ME from Aphrodisia, is a two-novella book. Both stories are about difficult vampires and the women who love them. In the first story, "Dark Obsession," Benjamin Bartlett is a three-hundred year old vampire, once a sea captain, who lives alone in a mansion on the coast north of Boston. He's relatively happy pining away for the vampire who turned him until he meets Star, a vagabond traveling with three companions. The four young people barge into his house when their van breaks down in a storm, and he starts to throw them out, but Star stands up to him and he's smitten. This story has a Gothic feel to it, and is lots of fun. The second novella, "Blood Lust," takes place in the
Yucatan on an archaeological dig where Chris Marsh is hoping to find a talisman that will make it possible to walk in daylight. Nicole, the gorgeous archaeologist running the dig, provides even more incentive to find it, but there are others out there looking, too. Chris hopes to stay one step ahead of them, but he doesn't succeed. This story is full of excitement.

I'm sure there was a time in my childhood when I wanted to be a writer, somewhere between when I planned to be a teacher and a cowboy, but I never took it seriously. Part of the reason, I think, was that I didn't know any writers. (My family had several teachers and cowboys in it; my mom was both.) I didn't really know I wanted to be a writer until I got involved with a group on the Internet, back when the Net was new. Before graphic interface, even. I was living in Alaska and hooked on a television show that had an active group of fanfiction writers (also a new thing). I started writing stories, and had a blast. One of my "editors" turned out to be a real NY editor who encouraged me to try writing a romance novel. I did; it stunk. So I backed up and learned how to actually write a romance, then tried again and got published. That first book was published in 2001, three days before the imprint closed. But that's another whole story. ;-) I just wish I knew who that editor was so I could thank her.

That's a hard question to answer. Before I started working under contract, my ideas usually came to me in the form of a character. I'd let him or her (usually him) stew in my head for awhile until he started telling me his story. Then I just sat down and went to work. I'm definitely a panster (writing by the seat f my pants), but have had to learn to do a better job of plotting ahead of time. Now that I'm mostly writing under contract, I either come up with a proposal from an editor's request, or I propose a story concept and work from there. It's fun, but definitely not the same process.

Quirk? Hmm. I would say I don't have any quirks, but that would be a lie. I am, after all, a Southerner. We have to be quirky or we get kicked out of our families. One thing I do that may seem a little strange to non-writers is I carry out conversations between my characters when I'm thinking about a scene. I've learned that you have to be careful about doing that in public restrooms. I'm not always sure if I'm talking aloud or just thinking the conversation, but I'm guessing I've carried on a few of them aloud before realizing there were other people in the stalls. I've had strangers actually run out of the bathrooms. Not that I blame them.

I've learned a lot about groups I didn't know existed before I started writing erotica. But before that, I was working on a spicy romance set in Louisiana in the 1920s and had to find out what women at that time in that place were using for underwear. I found out you can't get the answer to that question by Googling "women’s underwear 1920s." You do, however, get some very interesting sites. In fact, now that I'm writing erotica I ought to do that search again.

I've had some wonderful friends who have encouraged me, edited my writing, read what I've written to me, and generally asked the right questions. I was fortunate enough (after the first couple of years) to join the Romance Writers of America and start attending meetings of a local chapter. I learned more in the first two-hour meeting than I'd figured out in two years. That group, the Land of Enchantment Romance Authors, has continued to inspire and teach me for eight or nine years.

Authors? Jeez, there are so many. Most have no idea they've influenced me. In fact, one or two believe I'm stalking them, I'm sure. I read all genres of fiction, and plenty of non-fiction, so my influences are all over the board. I love to read James Lee Burke, David L. Robbins, Ellis Peters, Amanda Quick, Ruth Wind/Barbara Samuel/Barbara O'Neal, Susan Lyons, Kate Douglas, and so many others. I know that books are about to come out from some marvelous new writers including Gabi Stevens (not so new, but marvelous!) and Darynda Jones. I can't wait to read those!

If I hadn't looked ahead at the questions, I would have mentioned my family in the last answer because they have been my biggest supporters. My mother reads all my writing, buys books, frames book covers, and generally supports everything I do. In fact, she's the original Lydia (she loaned me her name). My husband lets me write undisturbed for as long as I need to. He even brings coffee and food to me to keep me going, and maintains my internet server. Now he's looking into learning how to upgrade my web pages. I can't ask for more. The cool part is that they were all this supportive even before I got published!

I'd love to! I've had lots of fun/strange/thrilling experiences lately, including appearing in a movie. (I'm the romance writer interviewed in Paper Heart!) Having a full film crew in my small condo for a couple of hours was interesting, to say the least. I'm just sorry I had to miss the Hollywood premiere, but I finally got to see the movie this past week and I don't suck as much as I thought I would. I'm also in the middle of a series of appearances and signings -- I'll even be signing books with Sherrilyn Kenyon in Albuquerque on November 14th. I'm in the anthology coming out October 1st from Silhouette Nocturne, AWAKENING THE BEAST, and I'm under contract for a novella for Aphrodisia in 2011. (I don't know what the title of that will be, but I guarantee the book with be hot.)

I'm currently working on a paranormal shape-shifter novella and a futuristic romance novel, neither of which have homes yet, and I'm enjoying every single minute of writing. Who can ask for more than the opportunity to do something they really love doing?

Thank you for letting me participate in this blog. I love to hear from readers. They can contact me at Lydia @ Lydia Parks.com (without the spaces) and visit my website at http://www.lydiaparks.com/.
at September 10, 2009

Wow! Both of these stories sound great and offer a new approach to the Vampire tale. Thanks for the blog. gcwhiskas at aol dot com

YOu really should have a warning before telling that bathroom story. I nearly lost my Diet Coke through the nose. I learned new things about you today Lydia. What fun.
--Gabi

Love your stuff. Looking forward to that Nocturne piece. ;-)

Devour Me sounds great -- both stories definitely have serious appeal. I'll look for you in Paper heart, too. How cool is that! :>]