Book Giveaway: TIE ME DOWN by Tracy Wolff 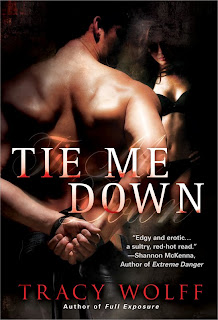 TIE ME DOWN -- Tracy Wolff

As the only woman on her homicide squad, Genevieve Delacroix maintains a tough-as-nails attitude that keeps men at arm's length. She never gives into her secret fantasies...until she meets a mysterious stranger who teaches her how little control she really has—over her mind and her body.

Cole Adams arrives in New Orleans believing star investigator Genevieve is his last hope for solving the murder of his younger sister. He just doesn't expect the hard-assed detective to look like a blond bombshell. Once he breaks through her inhibitions, he soon finds an unexpected obsession—driving Genevieve right to the edge of desire, and beyond...

But when the serial killer who has been terrorizing the streets of the French Quarter sets his sights on Genevieve, the lovers realize they've both let down their guard. And losing control could have fatal consequences...

Have you ever been tied up? Come on, confess! It can something sexy or something harmless.....
I remember as a child playing cops and robbers and getting tied up if I played a robber.

Post your response and be entered in the chance to win this book. US and Canadian addresses only.

Winner to be announced Wednesday night!
at September 20, 2009

I don't remember ever being tied up, even as a kid. So, either a very quiet childhood, or I'm suppressing some interesting goings on ;)

Hmm, I've not been tied up, but I have been handcuffed, does that count? It was great for a while.. until it was time to take them off, and first we had to find the key again.. and then to make it worse, it took a lot of shifting around, etc just to get them unlocked!

I have been, but I'm not telling you how old I was when it happened! *g*

I don't remember being tied up, even as a child. I also have been handcuffed and it was fun until my bro dropped the key and we had to go looking for it. LOL!

I would love to be entered in this contest please, thank you.

I have never been tied up before. Although it do sound sexy in some of the books I've read.

I have been handcuffed to a chair before. A friend of mine who was a cop was playing with his handcuffs and dared me. Saying he bet I couldn't get out of the handcuffs. So I played along until he lost the keys. He had to call his partner to bring the spare key. Talk about a funny embarrassing moment LoL and no I was not able to get out on my own LoL.

Nope. I played cops and robbers but always managed to be on the winning side. Hence no getting into binds.

I think most kids probably played cops and robbers and did the tying up thing. I know I was on both ends of that game!

No, I've never been tied up.

Tracy Wolfe's book sounds great! I'd love to read "Tie Me Down"!

LOL. I don't kiss and tell, but I will say as kids we used to take turns playing a houdini like game where we would take turns tying each other up then try to get out. We weren't very good at it, but always seemed to keep us occupied and out of trouble.

I've been tied to the bed posts before but we won't go into specifics. LOL!

Don't really recall being tied up as a kid tho. But I am sure it probably happened at some point. Just doesn't come to mind.

One time being silly I let my cousin tie me up with my dog's leash to a lawn chair thinking I was houdini. Instead I had to wait until my Mom got home to cut me out! Still incredibly embarrassing! :)

Hmmm...I've been tangled but never tied...or at least that I remember :)

The book looks fabulous. Count me in!

I do remember playing cops and robbers, but I was never tied up.

No, I have never been tied up even as a child. It sounds sexy readiing it in books but not sure I would enjoy it in reality.

I've never been tied up as an adult and I don't remember being tied up as a child either...must live a very dull life...sigh...

Anyway, the book sounds delicious, so count me in the draw!

No! Not even when playing as children!

A couple of friends did this to me once and I freaked out! I can't stand being confined and in small places, this is not for me.

The answer to this is yes. I was married and yes it was a very exciting experience and that is all I have to say about that. lol

Nope - I can't remember ever being tied up.

But, definitely count me in on the contest.

Heh, no. What a question!

Once, the nasty boy of our hamlet caught my brother (about 9 ?) and me (about 7 ?), tied our hands behind my back and put us in a junk room of my house.
Unfortunately (looking back), I got pretty soon loose and I was able to free my brother.
There aren't any more real experience for me of being tied.