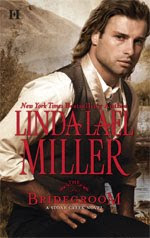 Gideon Yarbro loves his job. It takes him all over the country to places he’s never been, and he thrives on the travel and excitement. Gideon was fresh out of college when he went to work for the Pinkerton Agency, which was quickly followed by his current stint at Wells Fargo where, as an agent, his job necessitates endless travel and a fair share of danger. As such, he never, ever, intends to get married; this kind of life is not conducive to the happily-ever-after expected from a marriage. So, when Gideon arrives in Phoenix on his way to his current assignment in his hometown of Stone Creek, he’s surprised to find a letter he wrote ten years ago waiting in his mailbox.

Lydia was only eight years old when her father died, and back then she was facing an unknown life away from Stone Creek with her aunt, Nell Baker. Gideon, who was also leaving Stone Creek, did his best to calm little Lydia’s fears. Hoping to appease her, he wrote a simple note, sealed it in an envelope, and addressed it back to himself in Stone Creek. He gave it to Lydia and told her to mail it if she were ever in trouble. Gideon promised her that the minute he received the missive he’d run to her rescue and bring her back home to Stone Creek. Now, as Gideon holds that same letter in his hands, its simple message speaks to his heart. He sets off for the Fairmont mansion across town.

Lydia Fairmont is to be married to Jacob Fitch today at two o’clock. She doesn’t love the older man, nor can she bear the thought of being his wife, but with an overdue mortgage and a mountain of bills piling up, she has to marry Jacob or be cast out on the street. Lydia takes care of her elderly great aunts, Mittie and Millie, and she doesn't want them to lose their treasured possessions, so she has sacrificed her own future by agreeing to marry Jacob Fitch. For years Lydia has kept Gideon’s letter close, a memento of a happier time. And finally, desperate and looking for any other solution rather than marry Jacob, she mailed the letter to Gideon several months ago, but he never answered. What made her think he would still remember his promise after all these years?

Gideon never forgot that promise, it just took time for the letter to catch up to him. Lydia’s white knight is determined to save his lady love from a fate worse than death, and he storms into her home, throws her over his shoulder (in her wedding finery), carries her out the door, and dumps her into a wagon. Gideon’s prearranged plan has the passenger train waiting, and it is underway and moving before he and Lydia are seated. And no, he did not leave the great aunts behind, nor the housekeeper, Helga. It won’t be long, however, before an angry Jacob Fitch, along with numerous lawmen, follows them all the way to Stone Creek, where he might find himself locked up in his brother Rowdy's jail for kidnapping Lydia.

The only way for Gideon to stay out of said jail is to marry Lydia immediately, and the next day he becomes THE BRIDEGROOM, albeit a reluctant one who’s planning to walk out on her one day very soon. Meanwhile, the newlyweds set up housekeeping while Gideon morphs into his new job as a miner (when in reality he’s an undercover operative trying to intercept an impending strike at the Copper Crown Mine). Lydia marries Gideon, she loves him after all, but she is not prepared for his indifference, nor his insistence that they maintain separate bedrooms.

THE BRIDEGROOM is book five in The Stone Creek Series (see author's web site for a complete list and description of books, www.lindalaelmiller.com). This emotional and passionate novel stands alone, but you will find greater enrichment by reading the other novels. I highly recommend each and every one of these books; they are filled with wonderful adventures, powerful emotions, and lots of laughter and love.

For those of us who are familiar with the town of Stone Creek, Arizona, we welcome back the plethora of characters from the previous books. The year is now 1915. Long gone is outlaw Paddy Yarbro, but his wife Ruby still owns a saloon in nearby Flagstaff. Back in Stone Creek, Paddy’s sons, Rowdy and Wyatt, have given up the outlaw life and now protect the town. Rowdy married schoolteacher, Lark, and they have a passel of children. Brother Wyatt, his wife, Sarah, and stepson, Owen, have a ranch a ways out of town, along with former Ranger Sam O’Ballivan and his wife Maddie. Old Doc Venable and his wife Kitty are there too, but we’ve lost Rowdy’s big yellow dog, Pardner, who passed on, but left several of his offspring still protecting the Yarbros.

THE BRIDEGROOM is a must-buy book for August. The story is fast paced and exciting as Gideon and Lydia fight to discover that they are made for each other, if they live long enough to enjoy their marriage. Don’t miss this exceptional story!

Really loved this book - as all of Linda Lael Miller's :)