Q&A with Shirley Raye Redmond and a book giveaway of ROSEMARY'S GLOVE! 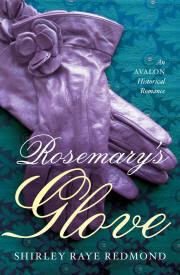 Give a big, warm welcome to Shirley Raye Redmond!

She's going to tell us a little about her latest release and give away a copy of her book to one lucky poster. All you need to do is post away and I'll put your name in the hat. Ask her a question. Comment about her interview.

Note: Contest is open to United States and Canadian residents only.


1. Tell us about your newest release.

ROSEMARY'S GLOVE is my third romance, but my first regency. It was released in hardcover on June 23, 2009 by Avalon Books.
Miss Rosemary Addison, an Incomparable Beauty and Considerable Heiress, sets her heart on becoming the wife of the dashing Thomas Alden, Lord Beverley, a man with a dubious reputation and a reluctance to come up scratch-to propose marriage. So Rosemary contrives a bacon-brained scheme, convincing her childhood friend, Broderick Loren--a handsome amateur botanist and collector of rare orchids--to agree to a temporary engagement. When the announcement appears in the Gazette, no one is more stunned than the conceited Lord Beverley. Rosemary soon finds herself consumed by conflicting emotions. Will she cry off her engagement to Broderick like a ninnyhammer? Or will she realize she loves Rick with all her heart?
One reviewer compared the book to a “Georgette Heyer romp” and I've been floating on a cloud every since. : I love Georgette Heyer's novels!

After reading LITTLE WOMEN when I was 12, I knew I wanted to be a writer-just like Jo March. I later joined the journalism club at Kubasaki High School (on Okinawa, Japan, where I grew up) and went on to college to earn an M.A. in Literature.

From everywhere! I actually have 2 file drawers full of ideas. When a folder starts to fill up, I go through it and see if there's enough “straw to spin into gold,” rather like the princess in Rumpelstiltskin! The idea for ROSEMARY'S GLOVE actually started with an article on orchids that appeared some years ago in the Smithsonian magazine. The article related the adventures of famous “plant hunters” who had great adventures like something in an Indiana Jones movie. That's why I decided to make my hero Broderick a rugged outdoors man, an amateur botanist and collector of rare orchids-with very little interest in London ton parties.

I still write my first drafts on yellow pads! So old-fashioned, I know. But I think better with a pen in my hand.

I've learned it's very important to provide the editor with a marketing plan or something to convince the business department that my book will sell. Even big publishers like Random House want to know if the topic ties in with the school curriculum or if there's major competition in the stores already, etc. I think many beginning writers believe all they need is writing talent. Sadly, that's not true any more.

Certainly, my English teachers and my first journalism teacher in high school, Mr. Hobbs. I've always been fortunate to have a number of friends who are also writers, and I've been a member of the Los Alamos Writers Group for nearly 20 years-a talented bunch of productive writers.

My husband-very supportive-- bought me my first electric typewriter, and when I sold my first romantic suspense novel, STONE OF THE SUN, he helped me pick out my first computer. I was already writing magazine articles and books when my kids were born, so they've never known me when I wasn't scribbling something. In fact, my first children's novel, GRAMPA AND THE GHOST, was a postpartum depression project that I started following the birth of my second child. : The book sold to Avon's Camelot books and went on to become a Weekly Reader book. Now I have a grandson who gets thrilled every time I have a new children's book out. He gives copies to friends for their birthdays. I named the main character in WYATT AND THE DUCK after him.

8. Can you tell us about what's coming up next for you writing wise?

My nonfiction picture book, BLIND TOM, THE HORSE WHO HELPED BUILD THE GREAT RAILROAD, will be officially released in August. In 2010, I have a middle grade nonfiction book on HIROSHIMA coming out, and in 2011, Random House will release my children's book, THE FAIRY HOAX. In the meantime, I'm working on another romance novel. Interested readers can visit my website at www.readshirleyraye.com to keep up with what's new.

This story looks like a fun one and I would love to win it!

I love childhood friends story lines! There's something very genuine and engrossing about the love that blooms. I think it's interesting that you write other genres, as well. :)

Wow, Shirley Raye, you've got your hand in multiple writing pots. Your books sound fun. I wish you all the best. -- Sherri Buerkle

Congrats on the new release! I love Regency romances, and this one sounds like a winner.

Do you have any favorite Regency romance books/authors?

Congrats on the new release! Sounds like a wonderful book. I enjoy the stories where you wonder who will she end up with?

Great interview! Little Women was one of my favorite books of childhood. Congrats on your release! I love regencies and this one sounds so good.

Awesome interview. Please count me in.

Congrats on the new release! It sounds great.

I love that you do it the old-fashioned way :) and enjoyed your interview. I think the title is very catchy and the book sounds lovely.

This story sounds terrific! And my favorite genre too!! Count me in, I'd love to win this one!!!

This sounds good, Shirley. Love this genre and when characters are in fields like botany.

All of your books sound wonderful, Shirley Raye! I've enjoyed hearing you talk about writing, and look forward to seeing you again at SWW and LERA.

Hi, Sarah Storme!
Thanks for your kind words.
Hope to make it down to Albuquerque sometime soon.

Hi Shirley! So nice to meet you. I love reading regency romances! And so love the blurb! I too love Georgette Heyer. I just looking to read another one, its great they re-releasing them. Do you have plans for more regency historicals? Any connecting books?

Yes, Caffey, I'm drafting another regency with Clarissa Page (Rosemary's close friend in this book) as the heroine. I'm thrilled that Heyer's novels are being re-released...and with such gorgeous covers.

Shirley is a new-to-me author and I love regencies. Count me in please.

Dear Shirley,
I love the fact that Avalon is doing Regencies and will go check them out.

Great interview. Please count me in.

Congrats on this one. I love historicals and this one looks wonderful. Awesome interview and hope to be able to read it soon.