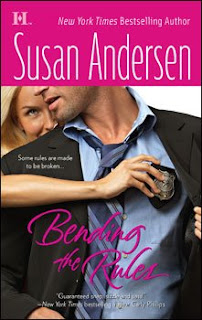 The first time Poppy Calloway and Detective Jason de Sanges met, it definitely was not love at first sight. He was not thrilled to have been pulled off of a “real” case in order to investigate some rich women’s idea of a crime, and Poppy and her best friends, Ava and Jane, were mad that the police were not taking a break-in seriously. Lust at first sight on the other hand....

When the detective shows up at a meeting to discuss how to handle the three teens caught tagging local businesses, Poppy’s pulse rate speeds up once again. However, just like the first time they met, it doesn’t take long for Poppy’s pulse to be racing for an entirely different reason. While the business owners agree not to press charges against the teens, and to allow them to clean up their graffiti at their own expense, thanks to Detective de Sanges’s “this is how teenagers become gang-bangers” lecture, the group nixes her idea to allow the teens to create a mural. Just how can a free spirit like Poppy be interested in a by-the-book stiff like de Sanges?

The men in the de Sanges family have a long history of incarceration, with the exception of Jason. In his opinion, it is only his strict adherence to the rules that has kept him from following in the shackled footsteps of his brother, father and grandfather. The fact that Poppy’s connection to the mayor’s office has given her and her friends special treatment angers him almost as much as the uncontrollable attraction he feels towards her. Being forced to work with her and her teenage delinquents shows Jase an unexpected side to Poppy, and he begins to question his pre-conceived notions about her. But he has no intention of getting involved with her, no matter how tempting she is.

Second up in the Sisterhood Diaries series, BENDING THE RULES is a story about opposites attracting. Poppy’s first years were spent in a commune; she’s a peace-loving, artistic woman, who believes in giving back to the community, and loves working with teenagers. Jase is a rigid, controlled man, who takes the “narrow” part of straight and narrow a little too seriously. Considering that he was headed towards a life of crime until a police officer stepped in and turned his life around, I found Jase’s initial hard-line attitude about three juveniles who had never before been in trouble a bit unusual. His turn-around is understandable, if grudging, and when he starts to give both Poppy and the teens a chance, Jase is in for a couple of surprises.

The first book, CUTTING LOOSE, centers quite a bit on the renovation of the Wolcott mansion that Poppy, Ava, and Jane inherited, in addition to the romance between Jane and Dev. However, BENDING THE RULES focuses on Jase and Poppy with a side story featuring one of the teens, Cory Capinelli. Cory and her mother moved from Philadelphia after her father was shot by gang members in retaliation for sending one of its members to jail. Now, Cory finds herself in a similar situation, and is not quite willing to trust the police or anyone else with the information she has. This secondary plot dovetails nicely with the relationship between Poppy and Jase, and inadvertently helps things along.

An engaging story with likable characters, humor, and some sexy scenes, BENDING THE RULES should not be missed.

I just LOVED detective Sheik, and loved that my heroin was a romance reader !!