A Perfect 10: MY FORBIDDEN DESIRE by Carolyn Jewel 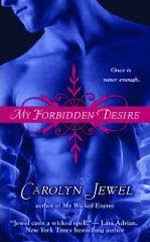 Alexandrine Marit's life has just been turned upside down. Harsh, the brother she believed to be dead for the past ten years, shows up at her apartment door. He tells Alexandrine that she is in danger and that the only one who can keep her alive is Xia, a man too sexy for his own good.

Xia hates witches and would love nothing more than to kill Alexandrine instead of protect her. However, he is the one chosen to keep her safe from their enemies, so that is what he is going to do. This doesn't mean that he has to be nice to Alexandrine or hide the fact that he hates everything she stands for.

Alexandrine doesn't believe for one minute that someone wants to kill her and doesn't hesitate to tell Harsh that she can take care of herself. Before night falls, Alexandrine is forced to eat those words. She is attacked by people intent on killing her. But these are not your average humans...instead, they are monsters. Xia is able to protect her because underneath his human exterior, Xia is entirely UN-human!

All I can say is WOW! Ms. Jewel has truly penned a jewel with MY FORBIDDEN DESIRE. It has all of the features expected by true lovers of paranormal romances. The hero is a Harley riding, sexy bad boy who just so happens to be a demon. He hates Alexandrine with a passion that doesn't prove to be as strong as his attraction to her. Xia plays by no man's rules and doesn't care whom he has to kill to prove that he's not the type to play around with. Alexandrine is a gorgeous witch who doesn't know anything about the world Xia introduces her to. She realizes that Xia hates her, but this doesn't stop her from thinking that he is just her type.

Naturally, these instant enemies try hard to fight their attraction to each other. The pages of MY FORBIDDEN DESIRE fairly light up as Xia and Alexandrine's chemistry builds. I was so caught up in the story that I admit to actually blushing when Xia begins to pursue Alexandrine. Although he is a man of few words, he somehow knows just what to say and exactly how to say it! My heart melted when Xia finally realized the extent of his feelings for Alexandrine. There is just something about seeing such a tough character reformed by love.

Xia's 'friends' are all gorgeous and dangerous. Kynan Aijan is one of his friends, and he just made me shiver with dread. He is such a messed up character who is on the side of good, but still motivated by evil. Rasmus Kessler is absolutely evil, and is determined to track down Xia and Alexandrine for all of the wrong reasons. Carson Philips is another important character who doesn't actually make an appearance in MY FORBIDDEN DESIRE, but is mentioned quite a bit. Her story is told in MY WICKED ENEMY (August 2008), which is the first book in the series. I didn't read MY WICKED ENEMY, but I was able to easily follow MY FORBIDDEN DESIRE. However, I was so impressed with MY FORBIDDEN DESIRE that I am running to find a copy of MY WICKED ENEMY!

MY FORBIDDEN DESIRE is a true Perfect 10. The action is non-stop, and the characters, as well as their internal struggles, are entirely believable and engrossing. I didn't want the book to end because I was totally caught up in the world of fiends, mages, magehelds and demonhelds. Ms. Jewel's imagination has unleashed a paranormal novel with entirely fresh concepts and possibilities. MY FORBIDDEN DESIRE is a novel that I highly recommend.