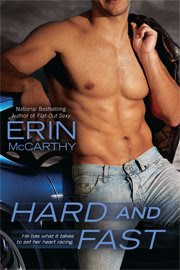 Gotta love the cover... isn't that chest gorgeous and yummy??? How about winning him.... The book I mean. :)

HARD AND FAST by Erin McCarthy
Out now!

An experiment in romance…

New to Charlotte, stock car racing country, graduate student Imogen Wilson meets Ty McCordle, a driver who inexplicably has her pulse racing. After an encounter at the track with a woman whose main goal in life is to marry a driver, Imogen realizes she’s hit on the perfect thesis for her Sociology degree. If she follows The Rules on how to get a man, can she steer her way to into the hearts of the drivers and establish their dating—and mating—patterns?

That’s testing the limits of passion.

Although sexy and reckless Ty is the ideal test subject, she knows she can’t pursue him for the sake of science. Yet he’s the one who’s chasing after her, and Imogen realizes that she actually wants to be caught. A southern gentleman like Ty won’t fail to disappoint, will satisfy all her curiosity—and make all the risks worthwhile…

How do you enter? I have a question for you... Are you influenced by the cover when buying a book?

Contest winner will be announced Thursday night
at July 05, 2009

The cover might make me pick up the book, but it's the blurb that influences me to buy the book.

A tacky cover will turn me off, but I have a pretty good instinct about what I will enjoy. I have been reading forever.

I can say I am influenced by the cover, but I always read the back too see if it something that will interest me.

So sometimes even though the cover captures my attention the book itself may not.

There are some auto authors I read even if the cover isn't eye catching, its the material inside that gets me. ;)

Unless it's an ebook, I definitely am, and it really makes a difference if the cover matches the book properly. The back cover blurb and reviews are what really sway me, though. But then if it's an author I already know, the cover doesn't affect my decision to buy. Hope that makes sense. ;)

Covers definitely help me make my choice. I definitely judge a book by it's cover....when I am browsing. NOW if I hear things about a book, and I think I will enjoy it, I would buy it without looking at the cover.

Oh, and can I just say, that I literally this morning finished Flat out sexy! :D I am now on the hunt for this one!!

I don't pay much attention to the cover. I buy by author and recommendation.

A cover will get my attention and get me to pick up the book. But other things are what makes me actually buy the book; back blurb, an auto-buy author, etc. If it's a new-to-be author, I check out the website and, hopefully, there's an excerpt which gives me a taste of the author's voice.

I've read this already, so no need to enter me! (When does your contest end? I'm mentioning it on my blog tomorrow.)

I'm totally influenced by covers. I've picked up books that I suspect are going to suck bigtime because I couldn't resist the cover. Usually there are abs and possibly Nathan Kamp involved...

I'll pick a winner Thursday night. Just edited the post to reflect this

Yes, sometimes to cover such as this one would influence me to purchase it!

Definitively. I'm much more likely to pick up a book with a great cover. Especially when it comes to new books and authors I haven't read before.

It depends. If I am shopping online, I usually "thoroughly" research the books I want to buy. I look at blogs, read excerpts, reviews, and interviews. Covers don't influence me all that much in this instance.

If I am at the bookstore shopping, or at the Grocery store, I usually get pulled in by covers. So for impulse buying when I am not planning to buy anything, covers will usually seduce me!

I might pick up a book to look at based on the cover, but buy based on blurbs and excerpts.

A smidge, but as others have said, it's mostly the author, blurb, and excerpts that really grab me!

I love this series !!!
Cover do influence me (a lot) but not the way you think. For instance thaugh I like this ocvers I probably won't buy it because it's too "obvious"... I know I'm a prude,lol.
I love fresh and funny covers (i.e Heidi Betts Girls with stick series).Without reading the blurbs I already want to read the book, seriously !!

A great cover makes me look twice, but it's the blurb and the author that makes me buy the book.

Is this open worldwide? If so, count me in please :)
I think the synopsis is the most important factor, but of course if the cover is very beautiful, there's bigger chance I'll read the back blurb...

In some respects yes, because it is the cover that usually gains my attention first that prompts me to read the back cover.
If I like what I read then there's a good chance that I'll buy, but it all starts with the cover...and this one definitely grabs my attention!

I would love to win Hard and Fast

Hard and Fast has an excellent cover! I would pick this up and check out the back blurb. Titles intrique me too. I will glance at a catchy title. Author's name is a draw. Sometimes I hate the cover, however, it's the blurb that influences whether or not I will buy the book!

Depends on the author. If the book is an auto-buy author, then the cover doesn't influence my purchase. However, an interesting cover on a book by a new-to-me author will lure me in to pick it up and start reading the backcover and inside blurbs. It's what is written there that will really influence my purchase of the book.

If a cover catches my eye, I will pick up a book to see what it is about but the cover doesn't influence my decision to buy a book.

I'm a cover junkie, if the covers not nice I don't even pick up a book usually. I always read the back though, just because a book has a pretty cover does not mean I will like it.

A bad cover, or one that I wouldn't want to be seen with on the bus (not too many of that variety), will induce me to not pick up the book - but I won't just buy a book if the cover is nice - the blurb on the back needs to be good.

I'll admit that I'm fairly pathetic. If I am in the mood to buy a book, I will leave with one (at least). Because I read a lot of books in the fantasy / paranormal genres, I will almost always pick something with a female who looks like they can kick butt on the cover. Bonus points if they have tattoos, and extra bonus points if the cover has a lot of blue in it. I don't want to think about the number of books and comics I've bought because the cover was blue.

I admit I do, I can't help it. If a cover grabs me I will at least pick up and start reading the back to check it out. A horrible cover is a turn off!

No a cover doesn't influence me to read a book it's the description that does.

Many times I have bought books that didn't meet up to the cover. It was sad because the cover is hotter than the book, but I wished it was the other way around.

I'm more interested in the blurb and excerpt (if it has either).

for me a cover might grab my attention but the blurb has to sound good for me to consider a book. Sometimes if I am not real sure about the book I will check out th authors website and see if I can read an excerpt. But the cover usually gets my initial attention. :-) Love the cover on this one though. Yum.

NASCAR and Ty...yum! I want to read more.

A great cover like this one will make a book jump into my hands at the bookstore. I still, though, just read the book, make a mental note and then read more about it when I get home. If I like it, I'll pick it up next time.

In some respects, a book cover does influence me in picking up the book. Then I read the synopsis in the back or the book jacket before I decide if I want to buy it.

I'll probably pick up the book if it has a great cover, but a cover does not sell the book to me. It has to be an author I follow or the blurb that gets me to the till.