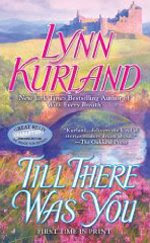 As he prepares to start his new job, architect Zachary Smith decides to change more of his lifestyle. In addition to giving up women, he’s also determined to find a new hobby for his weekends and holidays... one that doesn’t include the paranormal. After years of traipsing through the centuries with his brother-in-law Jamie, Zachary plans to settle into his job of restoring Wyckham Castle and living a quiet life. Plans that don’t look very promising when he arrives at the castle to find a quartet of ghostly matchmakers. Well aware of the exploits of his ancestral ghosts, Zachary heads to Artane, where nothing paranormal ever occurs.

With Geoffrey of Styrr loitering about the halls of Artane bragging about his prowess, Mary de Piaget is determined to stay hidden as long as possible. The man’s made his intentions clear, and Mary’s instincts tell her that she won’t live long as his bride if he gets his way. Her hiding place is found one night when a strange man bursts in on her, then tries to defend her against her father’s garrison. When she later encounters the man in the dungeon, she’s surprised and touched by his tender treatment of her.

Zachary is not entirely surprised when he finds himself stumbling around the medieval Artane, but he’s not thrilled either. After meeting Mary, he realizes that two of his resolutions are about to be ignored, as he can’t keep his mind off of her. As much as he’d like, though, Zachary knows that nothing can ever come of his feelings; first, she’s the daughter of a powerful earl, and he’s a peasant with no gold or land, and second, he doesn’t belong in her time.

The latest addition to Lynn Kurland’s wonderful world, TILL THERE WAS YOU features Mary and Zachary, characters who have already won readers' hearts. For those who haven’t read any of the previous books, Zachary is the brother of Elizabeth from A DANCE THROUGH TIME, and Alex from THE VERY THOUGHT OF YOU; Mary is the sister of Kendrick from STARDUST OF YESTERDAY and the daughter of Robin from IF I HAD YOU. Many of these characters, and ones from numerous other books, make appearances in TILL THERE WAS YOU, and most of them have an opinion or two about the romance between Mary and Zachary. His jaunts through various centuries have prepared Zachary for life in Medieval England, but Jamie’s lectures on tearing the fabric of time and leaving no footprint have him eager to return to 2006. The difference in their stations and his need to return to the future are tearing him up, and he knows that when he does leave, he’ll most likely be leaving his heart behind. Mary isn’t your typical medieval lass; being still unmarried at twenty-seven makes her a bit of an oddity, and she much prefers grubbing about in the stables with her horses to ladylike pursuits. With all the loving couples in her family, it’s difficult not to be a bit of a romantic and to wish for someone to treat her the way her father and uncles treat their wives, but Mary doubts that this is something that will ever happen for her. The relationship that grows between Zachary and Mary is both sweet and, at times, heartbreaking, as they don’t see much of a happy ending in their future.

In addition to previously featured characters, there are also quite a few new ones. Mary is quite close to her cousins, Jackson and Thaddeus Kilchurn; Connor, Theophilus and Samuel de Piaget, and Parsival de Seger. Theo and Samuel (twin sixteen-year old sons of Nicholas and Jennifer de Piaget), in particular, almost steal the show from Zachary and Mary, and I wouldn’t be surprised to see them popping up again – in the future or the past.

I’m awarding TILL THERE WAS YOU a Perfect 10, because it is a fantastic story that will delight both readers who are familiar with the families and those who aren’t.

Beautiful! I've read a few of hers and adore her books! I need to get this and her one before this. I didn't even know that this one was out! Thanks for the review!

Love this series, nice that we get to meet some new characters.