Spotlight Review: THE EDUCATION OF MADELINE by Beth Williamson 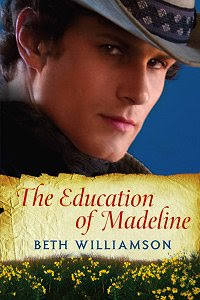 Madeline Brewster is a thirty-two year old spinster who owns half of the town of Plum City. She inherited her fortune from her miserly father who was a heartless moneymaker and string puller. According to the people of Plum City, Madeline also inherited his reputation. Madeline feels that she is too tall, not pretty enough and secretly yearns for a family of her own. When she hears of an impending hanging of an unknown drifter, Madeline hopes that her heart’s true desire will finally come true. She approaches the sheriff and the other town-folk and petitions for the drifter’s life. The arrangement she works out is for the unkempt thief named Teague O’Neal to stay with her for a month while completing repairs around her house. Once Teague washes all of the dirt and grime away, Madeline realizes that she is a lucky lady indeed. Teague is everything she could have hoped for.

Teague is relieved that Madeline saves him from the noose and offers him a place to stay. Imagine his surprise when Madeline propositions him to teach her the joys of intimacy. Teague is quite attracted to Madeline and accepts her proposal. As Teague begins to instruct Madeline on all of the pleasures that sex has to offer, he finds himself opening up to her in ways he never imagines. But there is just something about Madeline that Teague finds so hard to resist. The problem is that Teague must now confess his betrayal and hope that Madeline has the grace to forgive him.

THE EDUCATION OF MADELINE is a story about a woman who is determined to find a bit of enjoyment out of life. Madeline is strong and independent. Her relationship with her father wasn’t the best and she grew up alone and lonely. Even the people of Plum City are cruel because of her father’s stigma.

Teague is a man with many secrets and regrets. His past is wrought with pain and devastation. Each day is wasted on booze and women in an effort to forget the family he lost so long ago. Teague makes quite a few choices that he is not proud of, but realizes that he wants his relationship with Madeline to be much more than what it starts out as. Somehow, she gets under his tough demeanor and makes him feel things that were long forgotten. They are a well matched couple who complement one another in their strength and devotion. Secondary characters include Eppie, Madeline’s mulatto housekeeper and friend who cares deeply about Madeline. Jackson Webster is the creepy sheriff who hides so much beneath his surface. The other people of Plum City also add to the richness of the plot.

I enjoyed THE EDUCATION OF MADELINE. The plot is not overshadowed by sex but focuses on a budding love that eventually conquers all.

I have read this book and really enjoyed it.

I do love Beth's books! This is on my list to get! Great to read your review getting the gist of this book!