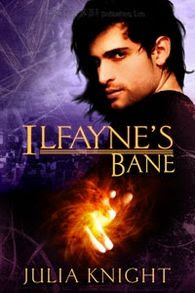 
My newest release is Ilfayne's Bane. It's the story of a young girl who finds out she isn't quite what she thought - in that she isn't entirely human, and her struggle to come to terms with that. When Hilde discovers she's half-kyrbodan - an immortal race feared by men - at first she thinks she can find somewhere she won't be bullied because of her odd ways. Sadly for her, the kyrbodans are even more against half-breeds than humans. Her new-found abilities also accidentally call back a long lost ( and frankly not missed) wizard named Ilfayne, who both humans and kyrbodans hate even more than they do Hilde. But beneath his cynicism and penchant for melting eyeballs, Hilde discovers that he' the one man who doesn't judge her for what she is, and Ilfayne, a man driven by four thousand years worth of demons and regret, finds a rare thing - a friend. Just as Ilfayne gathers the courage to tell her of the tender feels he thought he'd lost, Hilde's kyrbodan blood throws another spanner in the works - she is forced her to bond with a kyrbodan, and to deny it means both she and the kyrbodan she is bonded to could die.

When an ancient enemy of Ilfayne's resurfaces bent on revenge, there is one easy target to get to him - Hilde. When this sorcerer makes his move, Hilde has the lives of two men in her hand and has to choose - loyalty or love.


It was a compete surprise! While I've always enjoyed making up stories in my head, it was only when I was struck down with ME that I actually started to write. I couldn't do anything physically, so I relied on those stories. One day I watched a film that really got me thinking about the nature of sacrifice and Ilfayne sort of popped into my head. He wouldn't shut up! So I began to write.


All over the place! For instance I'm currently working on a novella about pirates - inspired by a visit to the Royal Navy Museum in Portsmouth. Maybe it was all those men in uniform? Frankly the problem is not having ideas - it's having the time to write about them all.


My interesting writing quirk? Hmm, that's tricky. Probably the turnips. Lol, well in Ilfayne's Bane anyway. Which is kind of a tribute to my husband - if you ask a question to which he doesn't know the answer, he will, without fail, answer 'Turnip'. I blame Blackadder myself. But that's a symptom of my humour. I'm genetically incapable of being serious for more than five minutes in a row.


That I’m capable of it! It's led me to look more deeply at people, to really look beneath the surface and try and figure them out. And that's led to more empathy for people and their situations too I suppose. Not that I was shallow before lol, but it has led to a lot of deep thought about human nature.

Authors, well I'm a huge fan of CJ Cherryh. I always fall head over heels for her heroes. That was kind of my original goal - to be able to write a hero as complex as that and have other people fall for him too. It was a real thril the first time someone said 'I've totally fallen for Ilfayne' ! As for people - my husband who has always encouraged me to do whatever I need to, and my friends who gently critiqued those first drafts till I started to get the idea. Now I go to a writers' group - and they aren't gentle!

My husband is thrilled and my kids - well my daughter wrote a book for me yesterday to take to my writers' group for 'critique' and they tell everyone! I'm thinking of hiring them as publicists. So I have lots of people happy for me, which is great.

Readers can learn more about Julia by visiting her website at http://www.juliaknight.co.uk/
at May 21, 2009

I loved Ilfayne's Bane, and I hope Samhain picks up the sequel. I'm a bit jealous that Baha got to beta it. *sniff*

Thanks for the interview, Julia. I'm partial to wizards, will have to add this to my wishlist. I do like swashbuckling pirates, too.