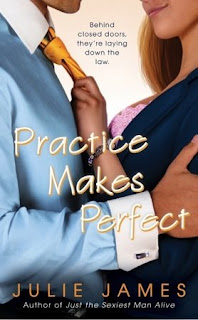 JJ: Let me start first by saying how excited I am to be here! I'm thrilled to have this chance to talk about my newest release, Practice Makes Perfect. It's a contemporary romance about two career-driven lawyers who work for the same firm. They can't stand each other and have fought behind the scenes for eight years. But when they're forced to work together to land a big client, they're surprised to find a powerful attraction behind all their animosity. Any opportunity to explore these feelings is put to end, however, when they learn that only one of them will be named partner--and they both vow to fight it out to the end. It's a battle-of-the-sexes story with plenty of verbal sparring between two people who *think* they're total opposites. And we all know what they say about opposites. . ..

JJ: It took me awhile to figure that out. I'm a lawyer, and I spent several years practicing at a large firm in Chicago before I even began to think about writing. But somewhere along the way, I came up with what I thought was a good idea for a romantic comedy film. So in my spare time, I wrote a screenplay. Having no idea whether it was any good, I started querying agents and managers in Hollywood. The screenplay was well-received, and I signed with an agent who optioned the script to a producer. I wrote a second script, which was also optioned. After that happened, I began to think about writing as a career. I thought about it for a long time (during which I wrote three more screenplays), and then ultimately decided to quit my job to write full-time. It was a nerve-wracking decision, but happily one that I've never regretted.

JJ: Because I write lawyer heroines (so far, at least), the ideas are very, very loosely based on my own experiences. Something will happen to me, and that will spark this tiny "what-if" flame, a "Hmm... now what if this happened, and then that happened, and then that?..." kind of thing. Practice Makes Perfect is a good example of that. I came up with the idea for the book while still working at my firm. In my group there was another associate, a man, who was the same year as me. We both worked hard and were "on the right track," and I often thought about what would happen when we came up for partner-- my group had never before made two people partner in the same year. With all that musing, my over-active imagination began to run wild, and I came up with the idea of two lawyers who battle it out "War of the Roses"-style before figuring out that there's a much deeper attraction between them.

JJ: Ooh. . . good question. Maybe that all my heroes, so far, have "J" names? Or that all my heroines have strong, gender-neutral names? (Taylor, Payton, etc.) In terms of the writing process itself, maybe that I come up with a playlist of music that I think goes with the tone of my book and I listen to those songs whenever I'm having trouble getting the right "feel" of a scene.

JJ: How real the characters become. I write very strong-willed characters, and they sometimes do things that I don't expect. What's been most surprising is that they sometimes do and say things I don't want them to. There were times when writing my first book, Just the Sexiest Man Alive, that the movie-star hero (who's a little cocky, to say the least) would say things and I'd think, "I can't believe he just said that." But if it felt true to his character, I'd write it down. Similarly, with Practice Makes Perfect, there were times when both the hero and heroine would do something in their quest to one-up the other and I'd think, "OMG, he/she can't do that!" But if it felt real and consistent with their character, I'd put it in the book.

JJ: Definitely Jane Austen. Pride and Prejudice is probably my favorite book, and for me it really sets the bar for witty, make-you-sigh romance with a wonderfully smart, sassy heroine. Another writer who has influenced me is Joss Whedon (creator of Buffy the Vampire Slayer), again for his ability to mix humor, drama, an incredibly strong heroine, and one of the most romantic love stories on television. (Pause for dreamy sigh for Angel...) And the earlier films of M. Night Shyamalan, who has a great talent for conveying emotion subtly through dialogue.

JJ: All of my friends and family have been wonderfully supportive of my writing career--especially my husband. Since he's also a lawyer, I often bounce story and character ideas off him. He's also the first person I show my screenplays and manuscripts to, and boy, is he ever my toughest critic! If I make it past him, I feel pretty good about what I've written.


8. Can you tell us about what's coming up next for you writing-wise?

JJ: I've just finished writing the first draft of my third book for Berkley/Penguin and I'm really excited about it! It's about a female Assistant U.S. Attorney who by chance witnesses a high-profile murder involving a U.S. Senator. The FBI agent assigned to the investigation is a man from her past that she doesn't get along with. The proverbial sparks fly as the two of them work together on the case, and even more so when it turns out that the killer might be after her. It's another romantic comedy set in Chicago, although I do sneak in a thrill or two with this one.

Thank you, Julie! Have any questions for Julie? She's going to be stopping by and answering any that you have.

Learn more about Julie James by visiting her website at http://www.juliejamesbooks.com/Site/Julie_James_-_Author.html
Practice Makes Perfect is now available for purchase at your favorite bookstore.
at March 11, 2009

Julie, this book sounds absolutely a great contemp! With two working together, they so have to face their feelings for each other and can imagine the tension too of them in this story! I saw too the next book based too with a law firm. Would your books be all related together?

I love reading contemps! What authors you enjoy reading in romance contempt too?

Hi Caffey! Definitely-- both working together and competing against each other for the one partnership spot means LOTS of tension! (But the good kind, too.) : ) My books are all stand alone titles (thus far, anyway), although they all feature a lawyer heroine from Chicago. I wonder where I came up with that...

So, who do I like reading in the contemporary genre?... I jump around a lot amongst authors. Hmm... I liked Sugar Daddy by Lisa Kleypas, Instant Attraction by Jill Shavis... and I'm currently reading Fragile by Shiloh Walker, which I'm very much enjoying.