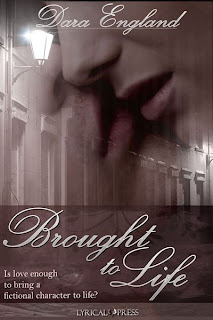 Brought to Life is something like a modern day fairytale. It’s the story
of a woman who falls so deeply in love with a fictional duke from another
century that she begins to believe she has brought him to life. This is
not only my debut novel from Lyrical Press but it’s is also the first time
I’ve any of my novel-length works published.

Writing appealed to me from a very early age. I started out creating
picture books before I could write many words and continued writing as I
grew older. I must have been around thirteen when I realized this would
definitely be my career and not just a hobby. I remember reading S.E.
Hinton’s The Outsiders and thinking I wanted to write a book and have it
published at an even younger age than she did. Sadly that didn’t happen
and I wouldn’t be published for many years yet.

Most of it comes straight from my imagination. Occasionally I’ll have an
interesting dream and feel inspired to put it down on paper. I’m also very
inspired by history. Sometimes I think nothing we can dream up to write
about could be more fascinating than all that has already been recorded in
the history books.

I’m not sure that I have many quirks. I just sit down and let the words
flow over the keyboard. Once in awhile I’ll lie back and shut my eyes in
order to visualize a scene more perfectly. Then after a few moments of
thought I’m back to tapping at that keyboard.

5. What was one of the most surprising things you learned in
creating your books?

That I could finish a story. I spent years revising old works and never
actually finishing any of them. I was beginning to think it was impossible
for me to finish anything but short stories. It took awhile for me to
acquire the discipline to keep pushing on.

6. What authors or friends influenced you in helping you become a
writer?

There are many people who have been a huge help to me. (I’m still trying
to figure out which ones I’ve probably forgotten to mention on the
Acknowledgements page of Brought to Life.) *Laughs*

I guess I would have to begin with Mom. She was one of those parents who
lie to their kids about their talent to encourage them. *Laughs* She would
tell me how wonderful all of my writing was and I would bring her scraps
of different things I was working on. It didn’t dawn on me until I had
kids of my own that I really hadn’t been a particularly brilliant writer
as a kid. Mom’s just like to encourage.

I also have a close friend (and cousin) named Sarah who has been a
tremendous encouragement to me. We’re something like critique partners and
she’s usually the first one (and often the only one) to see my works in
progress.

I also belong to several wonderful writers forums and have many friends
both in person and online who support and inspire me.


7. What does your family think about your career as a published
author?

Everyone is supportive—especially my sweet husband who works so hard so
that I can stay home with our babies and write.

I’m actually working on several projects right now. There’s a high fantasy
novel I’m trying to finish off and a historical/paranormal romance I’m
hoping to pawn off on the unsuspecting publishing world. *Winks* I have
yet another historical/paranormal romance in mind but that one’s little
more than an idea at this point. If only I had as much time on my hands as
I have ideas…

Thank you, Dara! Readers can learn more about Dara England by visiting her website at http://www.daraenglandauthor.com/
Check out the book and where to buy it by clicking this link.
at March 06, 2009

I wish you had as much time as ideas too!

Dara,
I agree, history can be so much more interesting, and intrigueing than anything we can dream up.

Can't wait to get my hands on Brought to Life.

Congrats on the release of your first novel, Dara! Very unique premise for the story and I love the cover.

I wanted to publish as a teen like S.E too (adored the outsiders) I was more than twice the age she was when she published her 1st book before it happened for me, but I'm hoping I can keep it going three times longer. =)

Thanks for the comments, guys!

Ooh! High fantasy. Love it and can't wait to see what you do. Cool beans.

Oh yeah, I wish I could clone myself, one for each idea. Congrats on your first book! Good things come to those who finish :)

Oh this is so unique! I love reading historicals and paranormals together! Definitely checking out your site! Thanks for a great interview too!