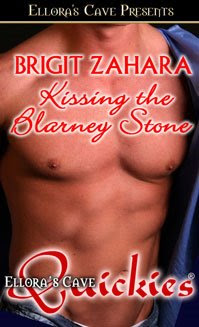 Here's a perfect book to pick up and read for St Patrick's Day! Brigit Zahara is here to talk about her latest release and what's coming up! Give her a warm welcome!!!

Just in time for St. Patrick's Day (March 13th release date), KISSING THE BLARNEY STONE is a sizzling tale about a North American woman's first visit to Ireland and the two hot and hunky Celtic cuties who steal her heart. Steeped in such cultural traditions as the drinking of the "black brew" (Guinness), celebrating St. Patrick's Day in grand style and the meaning behind the ancient Celtic jewelry, the Claddagh ring, KISSING THE BLARNEY STONE mixes laughter, mystical legends and steamy sex to take the reader on one delicious and daring romp..

Looking back, I see now that I always wrote, even going as far back as elementary school where I recall winning a limerick-writing contest. But realized it as a profession? Probably not until I left my full-time job as an editor to pursue it full-time..

Where do you get your information or ideas for your stories?

I know it sounds like a bit of a copout but honest to God, they just come to me. Sometimes I see a face or an image and that will get the ball rolling, however I find inspiration is all around me - in the people I meet, the talk of the day, the songs on the radio, the feelings I'm having at any given moment.

Hmm. I don't think I have any per se. One thing though (and I'm not sure if this qualifies as a quirk) is that I never plot ahead of time. EVER. It would spoil the fun for me! I have a vague idea of how the story shouwill end but for the most part, I just jump in and start writing, letting the events and characters unfold on their own.

Wow, what a great question! I think what surprises (and delights) me the most is the way the story just comes and takes over. Often it feels like I'm not the one creating it, rather I'm just the one typing it :)


What authors or friends influenced you in helping you become a writer?

Oh gosh. So many made me love words - that's for sure. Old classic romances like F. Scott Fitzgerald's THE GREAT GATSBY and of course, all of the Bronte sisters' works such as WUTHERING HEIGHTS and JANE EYRE. I don't know if, at the time, they made me want to be a writer but their words really resonated with me. They still do.

My husband is my biggest fan. He has always been a supportive and encouraging cheerleader in all areas of my life, but most especially when it comes to my writing.


Can you tell us about what’s coming up next for you writing wise?

With pleasure! I have several more quickies coming out this year - I say more, because I have already enjoyed the release of two since January. Here's the 2009 lineup thus far - but I expect to add at least four or five more titles to the following list :

Readers, you can purchase KISSING THE BLARNEY STONE at Ellora's Cave by clicking here.
at March 17, 2009

My hubby is Irish, and I realized I haven't found much with any sizzling ones for St. Pats! What a great blurb on this one, set in Ireland and Celtic heroes!! I shall be checking for your site at well. Nice to meet you Brigit.