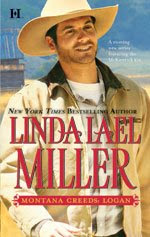 Logan Creed is going to change his family’s destiny – and their image. His father, Jake, was a hard working logger, but he was also a drunk and a womanizer. Jake married three women, who each bore him a son; Logan is the eldest, Dylan and Tyler are second and third. The boys grew up full of uncertainty and anger that finally culminated into an explosion on the day of Jake’s funeral, and in the end, each went his separate way, vowing never to speak to the others again. These three boys were restless, and they still are.

Logan managed to make it through law school after his rodeo days; Dylan and Tyler are still out there, running from something. But now Logan has come home on a mission. After visiting his cousins, the McKettricks, in Arizona, Logan is back to set things right on his own spread. He can’t change his family’s disreputable past, but he sure as hell can make the future of the Creed name a good one. Logan wants to prove to everyone, and to himself most of all, that the Creed name stands right up there with the proud McKettricks.

Stillwater Springs Ranch is in serious disrepair, but one thing Logan Creed has more than enough of is money. So far though, his riches haven’t bought him one lick of happiness. This old house has stood through the last eight generations of Creeds growing up, and the least he can do is fix the place up and set it to rights. Logan hasn't been in town a whole day before his grandmother, Cassie, shows up on his front porch, warning him that the first item on his agenda had better be making peace with his brothers. Logan knows he has to call Dylan and Tyler, but right now the hardest thing for him to do is pick up that cell phone. He’s convinced they won’t take his call.

Briana Grant wants nothing to do with any rodeo man, and the handsome Logan Creed is trouble with a capital “T.” Her sons, Josh and Alec, are enamored of the man. Josh immediately clicked into the Internet to check Logan out after their brief meeting in the Creed family cemetery, and it didn't take the boy long to inform tell her that Logan Creed is indeed a real cowboy, a rodeo star. That doesn't mean a thing to Briana. Her ex-husband, Vance, rides the circuit, and as far as she's concerned, there isn't one rodeo cowboy who knows the true meaning of the word commitment. She divorced Vance after he left her and the boys standing in front of the Stillwater Springs Wal-Mart two years ago. They had no clothes, no money, and nowhere to go, but thanks to Dylan Creed, they now have a house to call home. His brother, Logan, however, has to prove himself before Briana will trust him.

MONTANA CREEDS: LOGAN is a novel that ranks right up there with the best! Logan's story is a heartwarming and romantic tale about two people who have both been beaten down by life and are wary of its pitfalls. Even though Logan has all the money he could ever need, he still has to find a way to mend the past with his brothers and bring his family together. He’s looking to settle down, fix up the ranch, and raise a family, and Briana fits right into that plan. Briana, however, just wants to make a good life for her sons, but her job in a local casino barely pays enough to make ends meet. And Vance is always late on the child support, if he pays it at all. The final straw comes when Vance informs her that he’s coming to see the boys and “stay” awhile. How dare he think he can move in on their world? All he will do is break her, Josh's and Alec's hearts once again, and she’ll be left to pick up the pieces when he leaves, just as she always has.

Lots of secondary characters make up the pages of LOGAN: his grandmother, Cassie; Brianna’s ex-husband, Vance Grant; Jim Huntinghorse, Brianna’s boss; local Sheriff, Floyd Book; and troublemaker, Brett Turlow. Logan’s brother, Dylan, is seen at a distance, and there are some wonderful animal characters too. Briana's dog, Wanda, and Logan's pooch, Sidekick, steal several scenes along with latecomer to the story, Snookums.

Logan and Briana both have a multitude of problems to work out, but amid all the setbacks and even a bit of danger, they walk toward their future in this dynamic story. MONTANA CREEDS: LOGAN is the first of a trilogy about the McKettrick cousins, the Creed brothers. Each book is named MONTANA CREEDS with a brother's name. The month of March brings us Dylan's story, and April brings us Tyler's.

MONTANA CREEDS: LOGAN is one book you will not put down! The pages are filled with romance, passion, adventure, and mystery, and you will not stop reading until the final exciting page, which leaves you anxiously pacing for the next book! This one’s a Perfect 10!

I really liked this book too. Looking forward to Dylan & Tyler's story. :)~

I love her westerns!!! I hope to get this trilogy! Sounds fab! Great reading your review here!