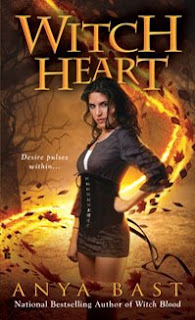 After living the past twenty-three years as the only human on Eudae, an alternate dimension where only demons exist, Claire is violently thrust onto Earth. Ordinarily this wouldn't be so bad, because Claire has secretly yearned to travel to Earth, but in this instance, two Atrika demons have followed her through the portal with the intention of killing her. The demons want something that has been magically stored inside of Claire and are determined to extract it from her by any means necessary. The only person Claire knows on Earth is Thomas Monahan, the witch she helped escape from torture when he was held captive on Eudae (see WITCH BLOOD March 2008). Eventually, Claire meets up with Thomas and his Coven of Witches and is only certain of two things: one, that she is extremely attracted to the Fire Witch Adam, a coven member who rescues her, and two, that the weapon stored within her is the elium, which is similar to a nuclear bomb with the power to completely destroy Earth if used incorrectly. Racing against the threat of capture by the Atrika demons and trying to figure out how to extract the elium stored inside of Claire is the essence of WITCH HEART.

Get ready for the ride of your life, because from the word 'go' Bast slams on the gas pedal and never lets up! I believe this is Bast's best installment in the Elemental Witches series, because the focus of WITCH HEART is more on the romance blossoming between Claire and Adam, which is supported by their flight from the big bad Atrika, who are almost impossible to kill by the way.

Claire is unlike any Earth Witch the Coven has ever seen. While living on Eudae, Claire became a sort of guinea pig who, over time, has had her powers warped into sort of 'demon-ish' abilities, and she is a lethal phenomenon. Adam is one of the most sensual, sensitive, and caring heroes. His wife has been deceased for years, but he remains devoted to her memory. Yes, he has had many, many, many one-night stands and quickies, but his emotions were never involved. Now Claire enters the picture, and all of the feelings he previously reserved for his wife's honor are brought to the forefront. Poor Adam feels as if he is being unfaithful to his wife by feeling the way he does for Claire. His struggle with these issues will endear him to readers and make him even more powerful.

Readers will also welcome hearing updates of characters from previous books, such as Thomas Monahan and the other members of the Coven that we have grown to love. Ms. Bast has done a fine job of delivering an equal mixture of action and love that will quench even the most selective reader's thirsts. I highly recommend WITCH HEART to paranormal romance lovers everywhere. I guarantee you don't want to miss this newest installment in the Elemental Witches series.