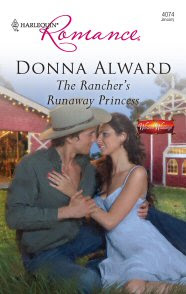 Today our guest is Harlequin Romance author Donna Alward.
Her latest is called The Rancher's Runaway Princess. Here's a blurb:

By royal decree – she’ll exchange her tiara for a rancher’s ring!

Brooding ranch owner Brody Hamilton keeps his heart out of reach. But there’s something about vivacious stable manager Lucy that brings joy to his hardened soul. Only he must put his past behind him before he can put a ring on her finger…

Lucy Farnsworth has just discovered she’s of royal blood. She should be glad, but it’s blown her world apart and she just finds herself wanting to be the old Lucy again. At Prairie Rose Ranch Lucy’s found the man who makes her feel she belongs. Only she hasn’t told him she’s a princess…


Now, meet Donna and feel free to ask her questions!!!!

The Rancher’s Runaway Princess is my fifth book for Harlequin Romance and it was one of those that felt sprinkled with fairy dust when I wrote it. My editor had asked for another cowboy book, so I made my hero a Quarterhorse rancher in Southern Alberta. Brody’s had a busy few years trying to get the ranch back on its feet. He invites a representative from the Mediterranean principality of Marazur to stay in hopes of building his breeding program. But he’s not prepared for the rep to be a red-headed slip of a woman who is actually American – and the King’s recently acknowledged daughter. As far as Lucy is concerned, she doesn’t want to be a princess and her life is turned upside down. She loves it at the ranch, but is pulled between the two worlds and so falling in love is quite complicated!

The ending came together in a flash and I was an emotional, yet energized wreck as those last chapters were written. Those last three chapters were probably the most fun I’ve ever had writing, and the ending felt like a fairy tale.

It certainly wasn’t a lightbulb moment or anything – I’d just always enjoyed reading and writing as soon as I started school. When I was in university, I dabbled in a lot of poetry and thought it was something I’d like to do on the side, but I never really had any firm plans.

But when I had small children and I was home and I felt like I needed something just for ME, I turned back to writing again and it felt good. I finished a first novel in two months and submitted it. By that point, I was hooked, and I knew that writing romance was what I wanted to do for the rest of my life. Publication didn’t happen right away, but I loved it so much it was worth waiting for.

Everywhere! The idea for The Rancher’s Runaway Princess came from a camping trip to the area where I set the book and we attended a barn dance. It was a lovely few days and even quite romantic! Romance can be found in the simplest of places. Under the stars, beside a campfire, throwing a snowball. And I play the “what if” game a lot. When I ask myself what if, sometimes it’s like a whole world opens up in front of me!

I’m not sure how interesting my quirks are! I like it quiet and I like it orderly – my desk is quite boring and neat. And I do like routine, so when I sit down when the kids have gone to school and the husband is at work and I have my mug of coffee and a tidy desk in front of me, I’m in the zone. Also, my critique partner gets on my case a lot when output is slow, but she also says that when I get the bit between my teeth I just go. It’s a great feeling when that happens.

Oh, I learn new things all the time, and sometimes it’s about the writing and mostly it’s about myself. I’ve learned that it’s possible to focus when the world is in chaos, that the hardest tasks often yield the best lessons, and I’ve even learned that whining and complaining aside, I’m actually, as Nurse Nellie would say, a cockeyed optimist.

Sometime in my lifetime I’d like to meet LaVyrle Spencer and tell her how much her books have meant to me as a reader and a writer. I have often read her books and thought, if I could just write a book like that once in my life I’d be happy. And I’ve got such a great supportive circle of writer friends that have influenced me so much – my critique partner Michelle Styles, Liz Fielding, Trish Wylie, and Kate Walker, and lots more that I “hang out” with every day. I couldn’t do this without my peeps.

My girls think it’s super cool, and honestly it wouldn’t surprise me if one or both ended up writing in some form one day. They both love reading and writing. And my husband is (surprisingly) proud. He keeps a hardback copy of all my books in his office bookcase, and hasn’t the least hesitation in telling people what I do for a living. They’re great. And my extended family and inlaws are pretty cool about it all too. My mum can’t see to read any more (I wish my books were on audio – maybe someday!) but my step-dad reads all my books!

8. What is coming up next for you writing wise?
The Rancher’s Runaway Princess is the first book set in my fictional town of Larch Valley. Right now I’m working on a follow up duet set there too. The first book features Jen O’Keefe (who you meet in The Rancher’s Runaway Princess) and Andrew Laramie, her high school sweetheart returned home. The next book, which I’ll be starting soon, features Andrew’s brother Noah and Jen’s best friend, Lily. I’m having a lot of fun writing the duet! But before that I have two more releases coming up this year, in June and November. June’s book (Hired: The Italian’s Bride) is set at a hotel in the beautiful Rocky Mountain town of Banff, Alberta, and next November’s is a holiday novella set on a Montana ranch (A Bride for Rocking H Ranch).

Thanks for having me as your guest today!!!

It *was* really fun. I wanted Lucy to have her happy ending so badly. She just GOT to me as a character, you know?

Thanks for stopping by!

I am looking forward to reading your Larch Valley Series.