A Perfect 10: RANSOM MY HEART by Meg Cabot 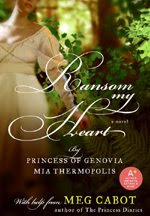 Finnula Crais is in a bit of a quandary. Her older sister Mellana is pregnant by her lover, Jack Mallory, a troubadour without a penny to his name. Finnula decides to help her sister by kidnapping a rich man and using his ransom to pay her dowry. Finnula thinks men are useless creatures and has no need to marry after her first unwanted marriage ended when her senile old husband died the night they became man and wife. She'd rather wear her leather braises than dresses and go hunting in the woods to capture game for the poor villagers who hardly have enough to eat. If Finnula doesn't find a man to ransom, her older brother Robert will hurt Jack so badly that he won't be able to walk.

Hugo Fitzstephen has finally returned home after ten years away in Jerusalem fighting in the crusades. He and his squire, Peter, are on their way to his home where he'll take over the earldom since his father, the Earl of Stephensgate, died while Hugo was away. He longs for relaxation, and perhaps some female companionship. And he may get his wish when he spies a beautiful young woman bathing naked in a spring. When she disappears into a waterfall, Hugo loses sight of her. The next thing he knows is that the young woman is holding a knife to his throat and making him her prisoner. Hugo can overpower and escape from the beauty, but he goes along with her game since he is having fun.

Finnula has found a rich man to save her sister and her family's name! But she quickly realizes her error because the man she captures is just a poor knight home from the crusades. Hugo is not sure what to make of the sweet Finnula and cannot believe she is allowed to come and go as she pleases, all alone and wearing braises instead of dresses. He will stay her hostage just so he can protect her and make sure she returns home all in one piece. Hugo tells Finnula some fibs so she doesn't catch on that he is an earl. He wants to know more about Finnula without her acting differently if she knew he was a man of great wealth and power. But Finnula has some secrets of her own, such as her first husband, who happened to be Hugo's father!

Eventually, Finnula will figure out who Hugo is. But until that happens, Hugo will show Finnula that love and marriage is not such a bad thing, especially with someone like him. Finnula may think she will get her ransom in coins, but Hugo will be ransomed with more than his own life...with his heart, which he places in Finnula's hands. He just hopes that she will want that and a lifetime as his wife.

I had never read a Meg Cabot book before, but had heard many wonderful things about her writing, and they are all true. RANSOM MY HEART was such an enjoyable read that it had me laughing till the very last page. The dialogue was witty, and the situations were laugh-out-loud hilarious. And Meg can sure write some steamy love scenes! Don't be surprised if you find Hugo and Finnula to be your favorite couple of the year. Their passion for each other knows no bounds, as well as their mutual love and respect for one another. These two really bring out the best in one another, and it was so adorable to see the very independent Finnula fall in love. At times, she may seem too innocent, but that is what makes her such an appealing character. She is both strong in body and sweet in her heart, and because of her nature, Hugo finds her to be the perfect woman for him.

Hugo is just as amazingly written as Finnula. At first glance, Hugo may seem to be a womanizer, but that is quickly pushed to the side because he only has eyes for Finnula. He is one of the most well-rounded heroes I have read about in a very long time. I also thought it was very telling about what type of person he is by how accepting he is of Finnula and her strange family. Each one of Finnula's sisters has a very distinct personality, and her brother Robert, who is the patriarch of the family, is just as loving and kind as the rest of his siblings.

There are many other characters who bring a great deal to RANSOM MY HEART. Hugo's cousin, the oily Reginald Laroche, and his voluptuous daughter Isabella may know more about his father's death then they are telling. And Hugo and Finnula have great support in Robert, the Sheriff of Shropshire. And we cannot forget the lovely, but simpleminded Mellana who is the one responsible for Hugo and Finnula finding happiness with one another.

RANSOM MY HEART has everything I am looking for in a great book. There is a romance that will tug at your heart, fun characters, and a mystery to be solved. When you have all of these things in one book, it deserves RRT's Perfect 10 award.

This does sounds good, will have to put it on my wishlist.