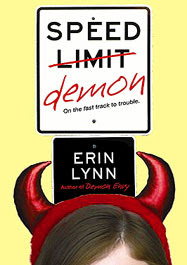 Kenzie Sutcliffe takes up where she left off in DEMON ENVY. Having gained one very annoying but cute teen-aged demon boy in Levi when she accidentally opened a portal to the demon universe, Kenzie is torn between envy (which Levi feeds on) and attraction. Everybody else sees Levi as an amiable, responsible teen-aged boy, but Kenzie can see him as the demon he is, and it’s driving her crazy. Achieving success in closing the portal to the demon world only by driving the family minivan through the kitchen, thereby destroying both, earned her an extremely long, and to Kenzie, unfair punishment. Now it seems that another portal has opened, and Kenzie must figure out where it is and how to close it without much input from Levi, who is not allowed to tell her anything. Kenzie doesn’t know whether she wants to kiss Levi or knock him through the portal as it closes!

SPEED DEMON is the continuation of the story begun in DEMON ENVY. Written for the teen reader, it is a light, humorous tale, without any heavy angst. Kenzie is somewhat whiny, but likable, a very normal teenager. She loves her family and friends, and she likes Levi a lot. She is a good kid and wants to save Levi from his fate, being dragged back into the demon prison from which he escaped when she accidentally opened the first portal. Kenzie accepts her burden of becoming a demon slayer and her mission of saving Levi from his fate. SPEED DEMON has the overall feeling of a bridge novel, not too many new things are introduced, but it also felt like being a teenager all over again, spending hours on the phone discussing your adventures with your best friend. Teen readers are sure to enjoy SPEED DEMON.