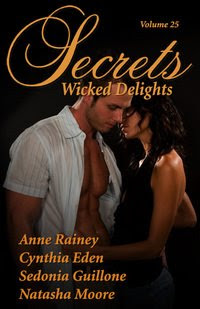 BLOOD HUNT - CYNTHIA EDEN
Vampiress Nema Alexander has a definite taste for bad boys. Slade Brion, a notorious bounty hunter, has just been charged with tracking her down.
He won’t stop until he catches her, and Nema won’t stop until she claims him... forever.

ENTER THE HERO - SEDONIA GUILLONE
Kass and Lian are sentenced to sex slavery for daring to seek freedom to love each other. Forced to make love for an audience,
their hearts are secretly united while their bodies are on display.
They have only one chance to escape ... with each other and with their lives.

Scandalous Behavior - ANNE RAINEY
Five years of secretly lusting after her intriguing boss, Kevin Haines, is enough. Tess Marley wants to escape her dull life and
see if Kevin is all she’s dreamed he would be. But Tess makes a major miscalculation when she crosses the line between lust and love.

Up To No Good - NATASHA MOORE
Former syndicated columnist Simon “Mac” MacKenzie hides a tragic secret. When freelance writer Alison Chandler seeks an exclusive interview,
she threatens not only his carefully constructed lifestyle, but his longstanding ideas about love.
Is their passion a distraction or the key to surviving their war of wills?

Enter to win this book and I'll announce the winner on Thursday night!

How do you enter?
You get two chances to win by posting to two out the three posts this week. Choose this one, the one tomorrow, or the one that will be posted sometime on Wednesday.

This is a winner for sure! Thank you!

I love the Secrets anthologies.

Secrets-Wicked Delights sounds great! I haven't read any of these 4 authors. Thanks for the chance!!

I've started a collection of Secrets so I would love this one too!

I have not had the priviledge of reading any of these books but would love to change that.

I'd like a chance to win. The Secrets books are nice reads :)

would love to add this to my collection of books; thanks so much.

I haven't read any of the Secrets books, but I would love to. They look and sound so juicy!

Sounds like an interesting mix of stories. I haven't read any of the Secrets books before so it would really be a good time to try one!

This sounds great. Count me in.

I love the Secrets books!

I too love these SECRETS books! I always have anthologies next to my bed to read at the end of the day. They are perfect because I can read the story from start to finished. So now that the books are out twice a year and two books each time, Even more to enjoy!

I love these books! I have I think the first 10 of them...but forgot about them.... I will need to rectify that!
Thanks,
Natasha A.

I have enjoyed all of Sedonia's stories. The others are new to me. Secrets has provided excellent anthologies and I am sure this one would be no different.

A great anthology by some great authors. Count me in.

I love the Secrets books! This one has some great authors too. Please enter me in the drawing. Thanks and Happy Holidays!