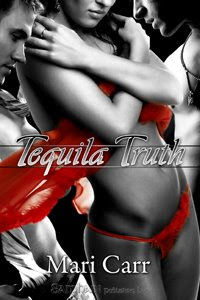 After seven years of friendship and living together, during a game of Tequila Truth, Kylie admits to her roommates Colt and Heath that her most daring sexual fantasy involves being dominated by two men at the same time. Six months later, Colt and Heath are getting worried about Kylie’s increasingly reckless behavior, and decide that if kinky sex is what she wants, they are just the men to give it to her.

Kylie is surprised when her easy-going roommates inform her that they’ve had enough and, for the weekend, she’ll answer to them. Though her independent streak urges her to put them in their place, the rest of her is so turned on she can hardly breathe. She has one weekend to explore her wildest fantasies with the two men she trusts most in the world, but when the weekend is over will they be able to go back to being platonic friends?

TEQUILA TRUTH is a tantalizing romantic tale. Heath and Colt have been friends since kindergarten, and have shared just about everything in the past twenty years. When Kylie answered their ad for a roommate, something clicked between them, but other than a little flirting when she first moved in, the friendship has been strictly platonic. Her admission that she’s not quite as vanilla as Colt and Heath believed has them unsure of how to deal with her, but when Colt walks in on her boyfriend beating her, he knows he and Heath have to step in before she’s truly hurt.

The friends-turned-lovers plot is given a bit of a twist in this sexy short story. TEQUILA TRUTH is a book you won’t want to miss.

Oooh, this sounds very good. I cannot wait to get an ereader!!!