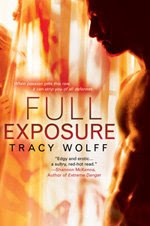 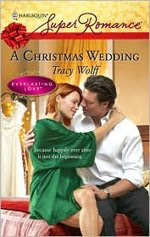 Give a nice welcome to Tracy Wolff! Be sure to check out her website for more information about her books, and of course, hit the bookstores to grab up her latest.


When did you first realize you wanted to be a writer?


I can actually tell you the exact moment, though not the day. I was in third grade and my parents had gone to the credit union near our house to apply for a car loan. They offered me the choice of coming in or waiting in the car (back in the days when that was still safe). I chose to wait in the car, but after a few minutes playing Barbie I was bored out of my mind. So I picked up a notebook and an aqua marker (all that was in the car at that moment) and began scribbling story.
Halfway through my tale of rainbows and leprechauns (did I mention it was a rainy day?) I realized that I was having more fun making things up than I had ever dreamed possible. I’ve been hooked ever since.


Where do you get your information or ideas for your books?

I get them from the world around me, from stories I hear and people I talk to. My first book, A Christmas Wedding, came to me when I was in the car with my husband, mother and children. We were headed into Austin from a little town called Fredericksburg , and we passed a thoroughbred ranch. My son asked me about what went into racing horses and I told him I didn’t know, but I would find out. At home, as I researched horseracing for him, I found myself hooked on writing about a family that was basically horseracing royalty.
These days, my husband—who travels a lot—is constantly bringing me magazines he’s read on one airplane or another, pages dog-eared and exclamation points in the margin to point out what he thinks would make a good story. I haven’t picked out one to write a book about yet, but I think it’s really sweet that he does that.

I don’t know if it’s a quirk, but unlike most of my writing friends, I can work through just about anything. Three children roughhousing, fighting, loud action movies blaring in the background, constant interruptions of “Mooooooom,” violent Texas rainstorms, phone calls, doorbells, etc.—and I can do it all without noise-reducing headphones and in an office that is completely open and borders the game room where my children spend most of their time. When I’m in the zone, it takes something pretty huge to even attract my attention. I even ignored pretty sever labor pains for something like seven hours while I was trying to finish up A Christmas Wedding.

Wow—there’s so many things I’ve learned from researching. For the paranormal trilogy I’m working on right now—based on the mythology of Ancient Egypt—I learned that the most ancient magic on earth (heka) originated in Egypt over seven thousand years ago. I thought that was pretty cool.

My father always encouraged me to use my imagination. We spent many hours making up silly stories together when I was young—about whatever object came to mind. He never let me take the easy way out, always pushed me to come up with the best ideas and best story that I could. And always told me that I could do whatever I put my mind to.
My best friend and college roommate, Jenn, always believed in me—and has been there every step of the way on my journey towards publication. She’s oohed and aahed over every story bought, every contest won, every cover, etc. The day my books came in the mail, she dropped everything and rushed over just so she could ooh and aah some more.
Authors who’ve influenced me: I’m an English professor in my other life, so there’s a lot of them. Everyone from Poe and Hawthorne and Whitman to Nora Roberts, Patricia Cornwell and Linda Howard. It’s a hugely diverse list.

My father died when I was twenty-one, so he never got to see me attain my lifelong dream. But my mother is thrilled—she’s the one I give credit to for the direction my writing has taken. She got me hooked on romance novels when I was in fifth grade and had read everything in the YA section of the bookstore. She tells me regularly that she always knew I could get published.

What’s coming up next for you writing wise?

A Christmas Wedding kicks off a six book publication schedule, so 2008 has pretty much flown buy in a shower of words for me. Next up is Full Exposure, my January NAL release and Naughty Bits, a Spice anthology that one of my stories has been selected for. I’m currently working on another Superromance called From Friend to Father, due out in June 2009, as well as two different paranormals—one based on Ancient Egyptian magic and one about dragon shape shifters.
at November 07, 2008

thank you for coming and sharing with us.. worked through labor pains? wow..
the books sound wonderful, and cant wait to find them in the stores..

Thanks for the warm welcome, Nascarandbeans. I so enjoyed answering the questions and poking around here at Romance Reviews-- it's a great site!

Hi, Tracy! Thanks for the great interview! How lovely that your family is so supportive! And I'm impressed with your powers of concentration! Seven hours of labor, huh? Zowie!

Congrats on the busy year you've had and on the exciting year coming up for you! I really enjoyed your serial on eHarlequin, and am looking forward to reading more of your writing!

Thanks so much, flchen1! I'm glad you liked Lightning Strikes-- it was fun to write. Have a great weekend!

It must be great to have such a supportive family!

It is great-- my mom is wonderful and so excited. She's dying for A Christmas Wedding to hit the shelves next week so she can tell everyone in the store at it's her daughter's book--LOL!

Hello Tracy! It's fancy meeting you here :) Great interview. I see you will be very busy in 09 but that would be great for us readers. Meaning more books for us to read by you :-) Congratulations on the new upcoming release :)