Q&A with Suzanne Forster! and a giveaway!! 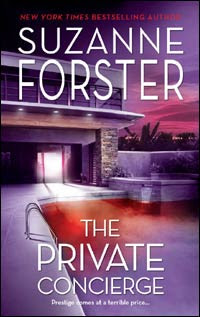 Our guest today is the always fabulous Suzanne Forster! Here's a blurb from her latest:

Post away and ask Suzanne any questions you want because she is giving away to two winners a choice of a book from her backlist!
at October 17, 2008

I'm interested in knowing if Suzanne attended these spanking classes and if so, what are some things she learned there? LOL

I love this! Suzanne, what's it like when fans come up to you and are really giddy? Do you get that heartwarming feeling?

Great intereview!! My question is how do you come up with such wonderful characters? Are they modelled after someone you know or are they just ones you create from your imagination?!

Very interesting interview! I am curious...do you tend to think of the plot or characters first? Also, do you ever travel to do your research?

Suzanne, just wanted to say how much I enjoyed your interview and learning about your background and the idea behind The Private Concierge. Thanks for taking the time to do that, and I'm so sorry to hear about your mother--though it sounds like she'd lived a wonderfully long and full life, there's no good time to go :(

And glad that you've found such a marvelous silver lining to that life-changing accident! Thanks again for sharing!

Hi Suzanne,
Congrats on the release of "The Private Concierge." Have you ever been on a ride along with law enforcement or the shooting range for research?

I'm sorry to hear about your loss. It sounds like you found some solace in your writing. I can't help but wonder if The Private Concierge is a different book from the one you would have written had you not had such a deep personal loss while writing it.

Congrats on your new release! Great interview too! And I'm sorry to hear about your loss.

I've enjoyed your books for years!
I always like to read the interviews to find out where the authors coming from. Your life has been quite interesting. I'm looking forward to reading "The Private Concierge".

I got a chuckle out of visualizing you in bed, typing away on a jerry-rigged computer. What a good husband won't do for his wife. I take it you still write that way but do you use a laptop now?

Great interview! Suzanne, what a story you have yourself as to how you get started writing!
The Private Concierge sounds so interesting :)
As for my question... haha a cop out - but - do you have a favorite book? (I know it's an "awful" question but I always want to know!)