More Giveaways....SECRETS OF THE KNIGHT 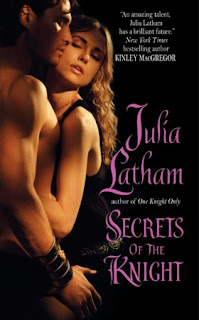 First off, congratulations to Limecello, who showed up at chat last night at www.romrevtoday.com and won a copy of Make U Sweat by Amie Stuart. Way to go, Lime!!!!


Today we have a historical romance to give away:

SECRETS OF THE KNIGHT by Julia Latham.

A knight never reveals her secrets...

When young Diana Winslow arrived at Castle Bannaster, her beauty and bravery disguised beneath a servant's dress, she had no idea her life would change forever. But now the cruel and lecherous Viscount Bannaster lies dead--and the novice Bladeswoman cannot escape her guilt. Nothing, not even fighting for the Crown, can erase her fears...especially when she comes face to face with Thomas, the viscount's startlingly seductive brother.

Desperate to keep him from discovering the truth, Diana attempts a daring abduction. But all her skills as a knight are no defense against the powerful, irresistible nobleman who has just become her prisoner. A man with a mystery of his own. A man who eyes her so hungrily, so wantonly, that he could tempt her to give up all her secrets for one wicked night in his arms...

Question for readers....As you may or may not know, Julia Latham is the alter ego of Gayle Callen. If your favorite author decided to write in another genre and changed her name, would you buy their book?

I think it depends on the genre the alter ego is writing. I would consider historical of another era.

If I'm a fan of the author, then I would definitely give her new book in another genre a try to see if I like it.

Sure if it's a genre I like, chances are if I liked her/his voice in one genre, I'm liable to like the story by the alter-ego. Even more likely to try my not-so-favorite genre if I really like the author's other books.

Yes, if I enjoyed an author's books, I would definitely want to try a book by the author in a different genre.

Thank you again! My laptop gave me the "battery is dying" message as you asked me the question! Haha. A stressful moment.

A couple of my favorite authors post under other names. Sherrilyn Kenyon and Colleen Gleason I read whatever they write!

I actually have done that. I loved Katie MacAlister's book so much that I stalked her to read her other book Ghost of a Chance under the name Kate Marsh. I was a little disappoint but I hope that the next book in the series would be better.

It would depend on the genre. However, there are a couple authors that I love, who I think I would read regardless of genre.

Yes, I would. I read many different genres.

I would definitely give the alter ego of one of my favorite authors a try. Recently I tried Julia Harper's debut contemporary book because of my love for her historical romance books written as Elizabeth Hoyt.

Of course! I'll follow an author into another genre.

Yes, I would and I have.

The only authors I can think of that changed genres was the writing team of Elizabeth Keyes (historical romance) who wrote contemps as Emily Baker. They've since gone back to writing as Elizabeth Keyes. Another author I've followed to another genre is Kinley MacGregor as Sherrilyn Kenyon LOL

I would definitely go for it. It worked out great for Lisa Kleypas!

Definitely, if it's a genre I like and I'm aware of the name change. :>]

I think I'd definitely give her writing a try! (And no, I didn't know that Julia and Gayle are one and the same!)

Congrats, Limecello--that was a good read!

It would depend on what genre they switched over too. I also did not know that Julia and Gayle were the same!!

It would depend on if it was a genre I read but if it was I would definitely give it a try.

it would depend on if I liked the genre that was written in; if I loved an author's books and the genre he/she changed to was not to my liking I wouldn't read it.