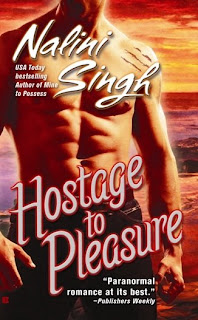 It has been over a century since the Psy Council instituted Silence, the program intended to eliminate all emotions in the Psy, thus ridding them of the unfortunate tendency a few had to become serial killers. But, of course, we all know that Silence didn’t work for everyone. Some still became psychopaths, and some...well, some never really became Silenced.

Dorian Christensen is one of the DarkRiver pack’s most dangerous sentinels. Though the changeling leopard is latent (he can’t actually take the form of his animal half), Dorian retains the traits of his cat, including its protective, possessive, nature. Unfortunately for the Psy, one of their own kidnapped, brutally tortured, and murdered his younger sister leaving this cat with a burning need to end them all. Then came Ashaya, a Psy who, along with her son, needs Dorian’s protection.

Ashaya Aleine is one of the Psy’s most talented medical people. The only one who can fully develop the new Psy implant intended to create a hive mind, Ashaya wants no part of it. Too bad then that the Psy have taken her son hostage to force her to cooperate. And Keenan isn’t her only vulnerability, her twin sister Amara is another weakness in Ashaya’s armor. The final flaw in this Psy? Well, that would be the fact that Silence never took for her, leaving her caught in a world where showing emotion is reason enough to have your mind wiped clean in a “rehabilitation” program.

Can Dorian, who has every reason to despise the Psy, really commit himself to saving two of them? And what about Ashaya, how will she handle the undeniable emotions the cat brings out in her? Only time will tell.

In HOSTAGE TO PLEASURE, Nalini Singh brings together two people who have nothing in common and manages to make it seem completely natural that they’d end up together. Dorian’s motto may well be “never surrender”, so it makes sense then that he’s managed to retain his sanity since his sister’s murder (albeit with help from his pack, which includes some Psy mates among its members). But then he meets Ashaya and discovers a driving need to possess her, so, as always, he’s determined not to give in. After all, if he fell for a Psy, it would be a betrayal of his sister’s memory, wouldn’t it? Though Ashaya has always felt emotions that she shouldn’t, passion wasn’t among them, at least it wasn’t until she met Dorian. Being the intelligent woman that she is, it doesn’t take long for Ashaya to admit to herself that she could be falling in love with him. But Ashaya knows that the secret she’s kept for most of her life could prevent Dorian from ever returning her feelings. And, of course, there’s the added complication of the Psy Council’s determination to recover Ashaya or to destroy her if it’s the only alternative. The saying about the course of true love never running smooth certainly applies in this case, but c’mon, surely it could be a bit smoother. For Dorian and Ashaya’s sake, of course, not because I spent the entire book sitting on the edge of my seat waiting for the moment when I could finally say, Ahh, they’re together forever now. :-)

Many of the characters from previous Psy-Changeling stories are integral to the plot of this book. Among them are, of course, the many members of the DarkRiver pack, as well as some of the Psy Council members, most notably: Ming LeBon (scummy man responsible for much of Ashaya’s ill treatment by the Psy); Henry and Shoshanna Scott (a couple whose relationship is clearly evolving); and Anthony Kyriakus (the leader of a very quiet revolution). Vasic, a Psy Arrow (law enforcement of a sort) is an interesting fellow; I look forward to learning more about him. Mercy, a DarkRiver sentinel, is happy Dorian seems to have found his mate, unfortunately that leaves her alone with no alpha types in sight to spend some “play time” with. Luckily, her book, BRANDED BY FIRE, is coming next; it promises to be all kinds of interesting. ;-)

If you love this series already, buy this book; if you don’t love the series, you obviously haven’t begun reading it yet. So what are you waiting for? Paranormal romance fans everywhere should have HOSTAGE TO PLEASURE on their book-buying list! Don’t miss this (and the rest of the series listed in order on www.nalinisingh.com). I promise you won’t be disappointed by Nalini Singh, one of the genre’s best and brightest.

I do have to get this book! Love the review!

My favorite paranormal series, definitely going to be interesting to see what happens next in Branded By Fire.