A Perfect 10: SEDUCTION OF A PROPER GENTLEMAN by Victoria Alexander 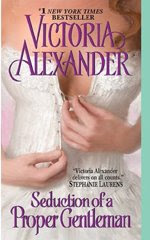 Oliver Leighton, the Earl of Norcroft, is mulling over his winnings . He should be happy that he won, but, strangely, he feels no joy. He and three of his friends entered into a wager as to who would be "the last man standing;" in other words, who would be the last bachelor. Despite the fact that Oliver has nothing against marriage -- in fact he hopes to find the love of his life some day soon -- to his surprise, he is still a single man. Fingering the four shillings he "won", and sending the other prize - a fine bottle of cognac back, unopened, Oliver strolls out to his waiting carriage.

The weight of the family rests on her shoulders, and Kathleen MacDavid must somehow convince the Earl of Norcroft to marry her, and soon. A widow, Kathleen has decided that all of the ills that have befallen her since the death of her husband nine years ago are as her aunt and grandmother insist, the fault of the five-hundred year-old family curse. She must marry the last Norcroft or there will be dire consequences. What those consequences are remains a mystery, of course, but Kathleen doesn't want any more bad luck in her life. When she and her aunt travel to the countryside to visit a neighbor of the Norcrofts, something happens to Kathleen that will propel her into the arms of Oliver Leighton.

This was supposed to be a relaxing escape from the City, but Oliver finds a beautiful unconscious woman in the front parlor. His mother is "organizing" things when he arrives, and before long, they have a guest ensconced in their house. When the guest awakens, however, she cannot remember her name or how she came to be there. Oh dear. And she is so lovely. What, muses Oliver, if she's married? She is interesting, if a little vague about things in her past, and she seems rather scholarly, something Oliver isn't. His mother names her Kate, and Oliver thinks she's not only mysterious and beautiful, but she is fun to be with and to talk to...most of the time. Desperate for her son to wed, Lady Norcroft hopes for the best.

SEDUCTION OF A PROPER GENTLEMAN is one of the sweetest, most entertaining romances of the year. Ms. Alexander once again presents her readers with wonderfully rounded characters, from Kathleen and Oliver, all the way to the wise, always proper butler, Hollinger. The witty repartee between the characters had me giggling more than once. Pity poor Oliver, for fate has put him in the country under the subtle machinations of his mother, Kathleen's aunt, and even the butler. It's a destiny he isn't sure he should argue with. Brilliant dialogue, a terrific cast of players, and a delightful premise, what more can a reader ask for?

SEDUCTION OF A PROPER GENTLEMAN is great fun and well deserving of a Perfect 10!