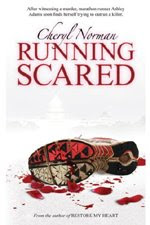 During the last two years, Ashley Adams has pulled her life back together after ten years in an abusive marriage. Part of recovering her self-confidence includes running, and she now trains for a marathon in Washington, D.C. After Peter nearly killed her, she left him, but even with the divorce official, he still believes she will return to him. He'll make her.

Early one morning, Ashley and her coach are running when a car nearly runs them down. What she takes for an engine backfire is a gunshot. Paul Stoddard, owner of the lucrative Stoddard Appliance store chain, had been on his porch to pick up his morning paper. Now he is dead. His wife seems unmoved at his demise.

Detective Rick Edwards is called to the scene of the shooting. He recognizes the witness although he doubts Ashley remembers him. He was called to her house on a domestic disturbance. She ignored his advice to press charges. Since that call, his young daughter has died of Leukemia, followed by his wife’s suicide.

RUNNING SCARED delivers on both romance and suspense. The writing creates such a realistic world that everything seems ultimately logical in twisted and unexpected ways. Ashley’s and Rick’s horrible pasts quickly bring the reader into empathy with them both. The air between them sizzles with underlying sexual tension to which neither wishes to succumb. The well-developed secondary characters of Peter; Ashley’s coach and friend Marvin; and Rick’s new partner, Logan, add great foils to the hero and heroine. The characters who come under suspicion of murder, including Ashley, create sharp suspense. Then, once the crimes are solved, the question remains: will Ashley and Rick act on their desires, or will they let their past failures haunt them?

Excellent writing, characters trying to grow beyond their previous limitations, along with a thrilling plot earn RUNNING SCARED an RRT Perfect 10.

Robin,
Thank you so much for this review. I'm thrilled and so pleased that you "got" the story! Bless you.