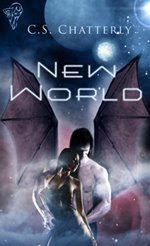 What was once the Northwest United States – 3033

Earth is once more a paradise but the population has dwindled. Freedom fighters, sentient beings from other worlds, are welcome to come and find mates with the idea of repopulation.

Falon March, an architect, has had time to design and build a home for herself and her intended mate, Zane Orros, who is from Dacor. Weary of fighting, he gladly agreed to the terms of his immigration and citizenship. The two have communicated with each other several times during the more than five years his journey has taken him to reach Earth. Neither is prepared for the instant attraction they feel.

Falon is beautiful beyond Zane’s dreams. Zane, who is gray all over and vaguely resembles a gargoyle, is handsome like some ancient god. Except for his skin tone and wings, he is like any man. Falon and Zane are more than physically compatible…they share an intelligent curiosity about most things and a wonderment for life. Of course there are some physical and cultural differences, and newlyweds, especially those who have just met in person, don’t always know everything to share.

Vasty Small, who has a four year old daughter with her alien mate, Danor, has just discovered that he has a shapeshifting ability that makes her sick, so she leaves him and their little girl. Because of this, Zane is hesitant to tell Falon everything about his own past.

Zane’s best friend, Sephos is a physician and is married to human, Constance Borden. Zane turns to them for advice when an unexpected occurrence in his physicality leaves him near death and he is unsure how to face Falon with the information. But missed communications and

Misunderstanding what she sees has Falon turning on Zane and he goes to live in the city after taking a job with Earth Defence Corp at the urging of Captain Meager Prospect.

Then disaster comes in the form of the enemies Zane, Sephos, and Danor fought against so show up and threaten Earth. Will Earth Defence be able to save the perfect world that has survived so much turmoil in its turbulent past? Will Falon and Zane get back the love and care they once had?

General Obrigar Trent and Falon’s sister, Selene, a reporter, play important parts in this tale of impending disaster that may end up with life in ruins. The love between Zane and Falon is hot, hot, hot with interludes of sweetness. I love this pairing and all the hope that comes with that love. C. S. Chatterly has penned an imaginative, adrenalin pumping adventure with alacrity and care. I am giving it a La Grande Mort.