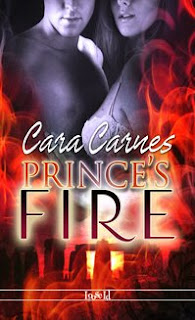 Cara Carnes will be my guest on Thursday. Be sure to pop in and say hello to her! You can purchase PRINCE'S FIRE by clicking this link. In the meantime, here's a sneak peak to wet your appetite.

She looked down into her cart and grimaced at the amount of sugar. The rush would help keep her awake. That and the truckloads of coffee she intended to swallow. Finding Shana was her primary concern. The moment she got back home, she’d retrieve the talisman and utter the chant herself.

It shouldn’t have taken so long for her to put it together.

As she stood there in line trying to drown out the sound of the older gentlemen in front of her arguing with the cashier, Gitana smiled. She remembered her lustful fantasies of the mighty warriors Nana had so revered. Images of virile men vying for the right to sexually gratify her assailed her. Cursing, she glanced down and noticed the six inches of space between her sneakers and the ground. She always levitated when she became overstimulated.

Her inner strength through breathing and meditation cocooned her in serenity. In that environment, her powers remained neutral. She sighed in relief when her feet touched the ground. Turning around to ensure no one had seen, a wall of exposed muscular sun-kissed flesh startled her.

She had always found the male body a fascinating thing, but this one defied belief. Enjoying the rock hard abs and perfect pecs pressed against her chest was a natural response, especially when her gaze leveled with the most impressive shoulders she had ever seen. She backed up slightly.

She moistened her lips as she looked down to the corded thighs and the prominent bulge tucked away so nicely in a pair of jeans. She swallowed as she forced herself to bring her gaze back up to a respectful height.

Sandalwood and musk riddled her senses. His smell beckoned her to embrace him. It made her want to feast on his body. She’d lick, then slide her hands over the corded muscles. That would be the perfect way to forget about her problems.

She had to stop ogling him.

Thinking there was no way this stranger with the body of a god could possibly have a face to match, Gitana almost didn’t want to look. But she did, and quickly lost all ability to breathe. He had the most sensual eyes, flecks of light danced within them. Warm, inviting, captivating. Shoulder length jet-black hair only added to the mysterious aura surrounding this man. It masked his face, setting him apart from the average-looking person. He was different and didn’t care what anyone thought. Threatening, in a way. Yet she couldn’t stop wanting to touch him. His lush, full lips were curved in a barely contained grin. This man reminded her of the warriors in her fantasies of Mysk. Paradise.
She and Shana had shared their wild fantasies about Paradise, where you could make anything become reality. Men just like the one before her had fulfilled her deepest cravings. And he certainly reawakened her fantasies. He’d be a demanding lover. His body alone was sculpted to appease her darkest desires. Strong, dominant.

God, I could spend all night under you. I need someone like you to tire me out so that I can forget my worries. Once wouldn’t be enough to quench my hunger. How would you feed my desires, warrior?

Soft male laughter tumbled in her head. I could think of nothing better than satisfying every hunger you could ever have.

She took a small step backward toward the other end of the register and gasped, her attention focused on his sparkling blue eyes.

Gitana fumbled through her purse, realizing that the clerk was waiting for her to pay. She tossed a bill toward the cashier, keeping her eyes on the stranger.
It’s not polite to invade one’s private thoughts.

She watched his stance relax. You sent those thoughts to me. I was courteous and replied. You should perhaps be more careful. You never know when someone may actually hear you.

Are you lecturing me?

I could think of a million things I’d love to do to you, Gitana. Lecturing you isn’t anywhere on the list.

How the hell did he know her name? She grabbed her bag and moved toward the exit rapidly.

His deep laughter echoed in her thoughts. Chicken.

How do you know my name? She hated the fearful tone her words were laced with but couldn’t contain it. Something about this man compelled her, but the fact that he knew her name and spoke telepathically concerned her even more.
You forgot the chocolate syrup. Shana said that you always raided the grocery store for sweets when you were worried or stressed. But she was quite clear you always drowned them all in syrup.

Rage flared within her, the air sparked in response to her surging power. He had no idea who he was messing with. The automated doors opened and shut rapidly in response to the increasing power flaring from her. Heat poured off her in waves, combating the central air system of the store. Patrons walked past, fanning themselves as they exited.

We will continue discussing this matter in private. I do not care to spend my day altering human memories when I could spend it with your legs wrapped around me.

Now she was really pissed. No one told her what to do, especially in that tone. Who the hell did he think he was to presume he would get anywhere near her after mentioning Shana? She looked around at the cashiers and customers in the small grocery store and knew he made sense.

Altering human minds? Could he do that? If he could, it meant he wasn’t human. The freak of nature needed to tell her what his intentions were. Now.
She backed out of the store. He followed her. She was relieved he kept a slight distance between them. Could he sense her powers building?

She made her way to the alleyway behind the store, intending to get some answers. An awkward pain coursed through her body. He cursed aloud. She glared at him.

“Take us to your secret place now!” He was angry. She fought him when he grabbed her arm and dragged her the rest of the way into the alley.

“Get your hands off of me! Who the hell are you, and what did you do with Shana?” She rubbed the back of her head, unable to ignore the stabbing pain that ran down her spine. Radiating from the center of her bones, it burned its way through her head until an intense throbbing began at her temples. Her vision blurred slightly. “And what the hell are you trying to do to me?”

“That pain you are feeling is not my doing. I feel it as well. The demons have found us because of your power surge. Calm yourself. Envision your hideaway. I can’t take us there without your help. Show me exactly what it looks like and where it is. Fighting them here would endanger too many innocent people.”

“For your information, I can take us wherever the hell I want to.”

“You cannot take more than your body weight plus ten percent, Gitana. Trust me on that. You can prove the truth behind it at a later date. Now, think about your place.Your life depends upon it. Trust me.”

She looked around. Nothing seemed out of the ordinary. Dumpsters filled with broken-down cardboard boxes lined the alley, crates strewn in between. A loud rupturing sound at the end of the alley seized her attention. She whirled around in time to see four creatures walk through a vortex, like something from a sci-fi movie. Their slimy looking skin was partially covered in animal hair. Their eyes were small in proportion to their heads, and they appeared to communicate in a mixture of clicks.

Anger and resentment festered within her, adding to the terror she was trying hard to ignore. This had to be a bad dream. Nothing else made sense. Fear wouldn’t solve the problem, but getting pissed might.

She hurled a fireball at one of the creatures and watched it stumble briefly. The man beside her hurled a stream of liquid at them and she watched in disbelief when it hit the being she had just struck. The water froze instantly and shattered the being into tiny bits.

Fear coursed through her when the other three monsters increased their progression, their clicks and beeps becoming louder. There was a slight push in her head, and the man beside her squeezed her upper arm in a silent request. She looked over at him, closed her eyes, and thought of her open field in the country outside of town. It had served as her training ground. Only she and Shana knew of it.

She felt a strange pull then she was falling on top of him. She looked around, surprised he had managed to get them away from the alley and straight to the place she had envisioned in her mind.

“What were those things? And who the hell are you?” The thick foliage around the clearing moved restlessly in the light breeze. No weird portals or creatures appeared from thin air. Her concern began to dissipate, the surroundings offering a sense of normalcy to the freakish events that had occurred. She knew every inch of this terrain. That had to give her some sort of advantage. She sprang to her feet.

He stood slowly and scanned the area as if memorizing every inch of it. A smile crossed his face as his gaze roamed across her body. Her skin tingled under the perusal. “I am your mate, and I came to bring you home.”

You write a fab description! Gosh, I was totally picturing him with that excerpt. Wow, this is so good! Its for sure on my wishlist!